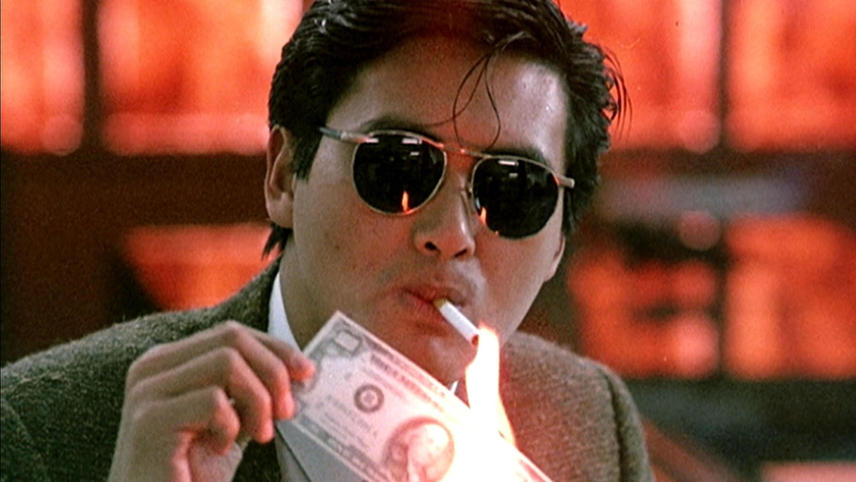 John Woo makes cool films. His Hong Kong action films are amongst some of, if not the best, action movies ever made. Films like A Better Tomorrow and its sequel, A Better Tomorrow II, The Killer, and Once a Thief had high grosses that contributed to the golden age of Hong Kong Cinema during the eighties and early nineties. His work proved influential not only in Hong Kong, but also in the international scene, leading to interest in Hong Kong cinema in countries like the United Kingdom and America, and influencing a generation of non-Asian filmmakers. Woo would himself later make the transition to Hollywood, making films like Broken Arrow and Face/Off, sadly not up to the same standard as his earlier work. For a generation though, Woo defined what it meant to be cool. Gangsters started to dress like Chow Yun Fat in A Better Tomorrow, complete with Alain Delon sunglasses (which caused them to be sold out in Hong Kong). The over the top gun fight choreography, slickness, hint of black humour, and symbolism that has become cliché through uninspired repetition by Hollywood was fresh and exciting. As Bordwell says, he is the ultimate Hong Kong auteur, because when you were watching one of his films, you knew that it could only be a John Woo film.

Early in his career, Woo worked at Shaw Brothers under the prolific director, Chang Cheh, whose first big hit had been the wuxia film, The One-Armed Swordman. As well as being the first movie to make HK$1 million, it was the first of a new style of wuxia films that focused on anti-heroes and violence. Similar themes would run through many of Cheh’s films, including some that Woo worked on, like Boxer from Shantung, and Blood Brothers. The influence that Cheh had on the young Woo was profound. He has talked of learning from Chang how to film actions scenes, and he would go on to address those same themes in his own films, labelled heroic bloodshed, in which the traditional ideas of morality was subverted by that of fidelity and brotherhood in those on the other side of the law.

Woo was taken on by Golden Harvest and made a number of modestly successful films until his luck started to fail, and he was on the outs when he met Tsui Hark in the early eighties. Tsui had studied film in America and had been a part of the Hong Kong New Wave of art house directors, but had moved away from that area, first to make blockbusters, like Zu Warriors of the Magic Mountain in 1983, and then to work as a producer. Together they decided to remake Lung Kong’s 1967 film, Story of a Discharged Prisoner as A Better Tomorrow, directed by Woo with Hark having the final cut privilege. Chow Yun Fat, up to that point a TV actor, was hired to plays Mark, a triad member wounded while killing the gang leader that set up his best friend Ho (played by frequent Chang Cheh actor Ti Lung). When Ho is released from prison, he wants to go straight, but finds that his subordinate, Shing, now the gang leader, not only tries to force him back into crime, but also humiliates the limping Mark. Together with Ho’s police officer brother, Kit (the late Leslie Cheung, at this time already a Cantopop star) they work together to bring Shing down, leading to a bloody finale. While the film is overall a little too emotionally narrow to be realistic, instead the overt use of emotion matches the hyperreality of the action scenes. The film is essentially about brotherhood, the artificial brotherhood that arises between Ho and Mark because of the barrier between Ho and Kit, and the obligation of brotherhood between Ho and Kit that overcomes that barrier later in the film. The film was a huge box office success and remains the favourite of Hong Kong critics, launching both the career of Chow Yun Fat and Woo.

Due to the success of the movie, despite tensions between Woo and Tsui over the cut of the first film, Woo was brought back to direct a sequel, A Better Tomorrow II. Chow Yun Fat also returned, despite the death of Mark at the end of the first film, as Mark’s unmentioned twin brother, Ken. The movie performed well at the box office but is inferior to the first, feeling at times campy and even by Woo’s standards a little overstated on emotion. Tsui drastically recut the film, contributing to a growing rift between himself and Woo, leading to Woo refusing to work on a third A Better Tomorrow film, and almost disowning the second. Woo used the script had written for the film prequel set in Vietnam to make A Bullet in the Head, a much darker film about three friends that go to war and are changed, with only one returning. After the problems with A Better Tomorrow II, Tsui wanted the studio to fire Woo, but they were unwilling, so instead he refused all Woo’s proposals for films. In order to make The Killer, he had to secure financing through his friend, and the film’s main star, Chow Yun Fat.

The Killer is regarded by most Western critics as Woo’s best film. Inspired by Scorsese’s Mean Streets and Jean-Pierre Melville’s seminal Le Samourai, the film is about an assassin determined to go straight after accidently blinding a lounge singer (played by Cantopop idol Sally Yeh) during a gun fight, but first he must do one last job to pay for corrective surgery. Again Woo returns to the idea of a man on the other side of the law with his own morality, seeking his own redemption through his relationship to someone else. It is also his most stylized film, featuring for the first time the use of the scattering doves shot to symbolize the departing of the soul, later recreated in Face/Off; obvious symbolism, but as Woo is an obvious director it works. Amidst all the bullets and blood and male bonding, it seems no more hyperrealistic than the frame that surrounds it.

Woo followed The Killer with Bullet in the Head, Once a Thief and Hard Boiled. The latter perhaps achieves the pinnacle of Woo’s over the top style in the climax when Chow Yun Fat, as a police officer, runs around a hospital with a baby strapped to his chest, blowing away uncountable numbers of bad guys. After years in Hollywood, Woo returned to Asia to make the two part historical epic Red Cliff, using the romance of the three kingdoms as source material. Applying what he had learned about making blockbusters from Hollywood, Woo’s film was a huge success and broke domestic records, proving that twenty years later he has still got it. Forget Besson, Tarantino, and co., you can keep them. For me, it just doesn’t get any cooler than John Woo.