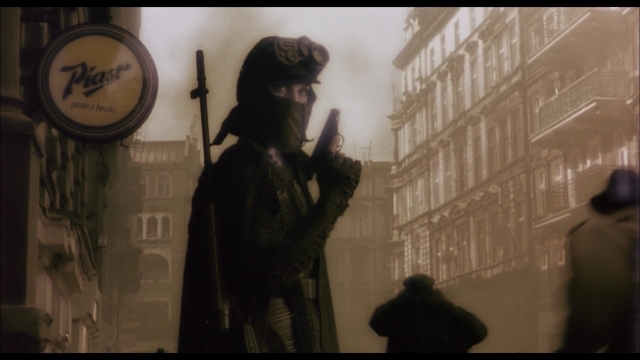 Before we begin, I would like to say a few brief words on the nature of this column. I believe it is impossible to talk about films without discussing what are considered spoilers, and to quote Jonathan Rosenbaum, “Is this form of worry a fit activity for grown-ups?” Therefore if you have an aversion to spoilers, I recommend that you do not read this column, consider this your only disclaimer.

5. The “true” world-an idea which is no longer good for anything, not even obligating-an idea which has become useless and superfluous-consequently, a refuted idea: let us abolish it!
(Bright day; breakfast, return of bon sens and cheerfulness; Plato’s embarrassed blush; pandemonium of all free spirits.)

6. The true world-we have abolished. What world has remained? The apparent one perhaps? But no! With the true world we have also abolished the apparent one.
(Noon; moment of the briefest shadow, end of the longest error; high point of humanity; INCIPIT ZARATHUSTRA.)”

– Friedrich Nietzsche, Twilight of the Idols

Avalon, Mamoru Oshii’s 2001 follow-up to the critically acclaimed Ghost in the Shell and his first live action film since 1992’s Talking Head, deals with the nature of reality in the near future. Filmed in Poland using a post-production muted sepia filter, the colour and the architecture recall Andrei Tarkovsky’s Stalker and the cinema of Eastern Europe, particularly Andrzej Wajda’s war films trilogy. The protagonist Ash (named perhaps as an homage to Wajda’s Ashes and Diamonds) divides her time between playing the illegal virtual reality war game Avalon solo through which she earns a living and her time in the real world. Outside the game, she lives an isolated life in a single room apparent, avoiding all human contact in favour of her pet basset hound. As the film progresses, she runs into a member of her former Avalon party, Wizard (one of many references to the classic Japanese role playing series, Wizardry) and learns that another member, Murphy, has fallen into a coma, succumbing to one of the dangers of Avalon in becoming one of the Unreturned. As Ash learns more about the game and Murphy’s condition, she discovers there exists within the game another reality, Special Class A, also called Class Real, an recreation of the world in which we live.

1.The Allegory of the Cave as Video Game

Ever since Platonic man emerged from the allegorical cave of The Republic with a concept of forms at hand, the real and the unreal have played a key part in the way that we look at the world through ontology. Most Avalon discussion regarding reality tends to focus on trying to decipher which of the three levels of reality is more authentic objectively, but I believe the most important thing is to remember that in cinema, perception is reality. The first reality, the one that is presented as the most inauthentic, is the game Avalon. It has the heaviest sepia tones and the events that take place within the game are logically the most unrealistic; in fact it is treated by every character in the film as being a virtual reality and as such resembles the lowest level on Plato’s scale in that of the cave. The second reality is the one outside of Avalon in which it appears Ash lives. This has been seen as problematic due to a number of inconsistencies such as the strange disappearance of her pet basset hound, the appearance of the ghost in the hospital, et cetera. However, for all intents and purposes it is the reality that Ash inhabits on a day to day basis and whether it is actually real or another level of Avalon, perhaps something like a lounge where one waits between missions, is irrelevant as both the viewer and Ash seem to regard it as being real, as the world of the phenomena it represents the world outside of the cave. Lastly, the third reality is that of Class Real, what seems to be an appropriation of what consists of the world that we live in, colourful and full of people in comparison to Ash’s sparse reality. A number of reasons lead me to speculate that Class Real is in some way representative of what Plato calls the divine realm, also called the true world. The first is that it is very difficult to access and very few people are able to attain it due to the special conditions required. One of those conditions is that in order to open the gateway, a high level Bishop class character must be present in order for a ghost to appear, the key to accessing Special Class A. The ghost matches the image of one of the nine sisters, seen earlier in the film, the creators of Avalon that in a hierarchical form signify its gods.

2.The Matrix and the Illusion of Choice

In the Platonic sense, it is this realm that is the most “true”, an idea that is embodied by Ash’s ex-team mate Murphy. Others, however, would argue that the individual should choose actual reality over all other possible realities as the one that has the most truth in relation to him or herself. What makes Avalon such an interesting film though is Oshii’s unwillingness to ascribe any sort of intrinsic value to the different levels of reality. The reason that The Matrix fails, both as a film and a philosophical experiment, is because of its rigid adherence to the traditional black and white morality of the Hollywood system. In The Matrix, the moral individual must choose the real world despite its post-apocalyptic state in order to rebel against the machines. To choose to stay in the matrix is to commit a sort of intellectual suicide and become a slave to a false reality. Someone like Cypher who wants to go back is viewed as a race traitor. Therefore, any value that is ascribed to either the actual reality or the machine’s virtual reality comes from external factors. Neo isn’t even given a real choice between realities, as his has no a priori knowledge of what “taking the red pill” actual entails, other than Morpheus’ overly dramatic speech about truth. Neo is driven to act only through his anxiety that there is something wrong with his current reality, in the Kierkegaardian sense, his anxiety presupposes action. Any ethical decision made in such general terms with no real knowledge of what the outcomes entail does not seem to be an ethical choice to be applauded. As Cypher admits later, had he been informed, he certainly would not have chosen the red pill. There is a distinct lack of authenticity in Neo’s choice, despite the fact that is supposed to be the most important thing in the film.

Oshii is too smart to fall into the same pitfalls a when it comes to differentiating between the three realities. Not only does Ash have a priori knowledge of all three, throughout the film she also has direct experience in each of them before the film’s dénouement.  He is also too smart to attach any significance, moral or otherwise, to any of the layers of reality that Ash encounters through protagonist of narrative bias. While Bishop may seem to favour the game, being a part of the system, he is not to be trusted and Murphy may expound the virtues of choosing Class Real, giving his life to prove it to Ash, he is ultimately wrong as despite his convictions his body disappears just like in the game. Ash is left to choose which of the three realities has the most meaning to her, therefore her choice is an existential one. To make the authentic choice, she needs to avoid bad faith by choosing for herself and by not being what other people define her as. For me, this disqualifies Avalon, because in the game she is seen as Ash the warrior and not the person that she is. She is objectified as a character and not an individual, just as Sartre’s waiter becomes a stereotypical waiter at his job to conform to expectations. The choice that she does make is never made apparent, only arriving in Class Real she initially follows the order of Bishop to track down and kill the Unreturned, but after the death of Murphy she turns the gun on the ghost in an act of symbolic sacrilege, existential rebellion against the external forces. The last scene of Avalon is to me iconoclastic, a rejection of the rules and norms of reality and ultimately an authentic defiance in the name of individual choice.