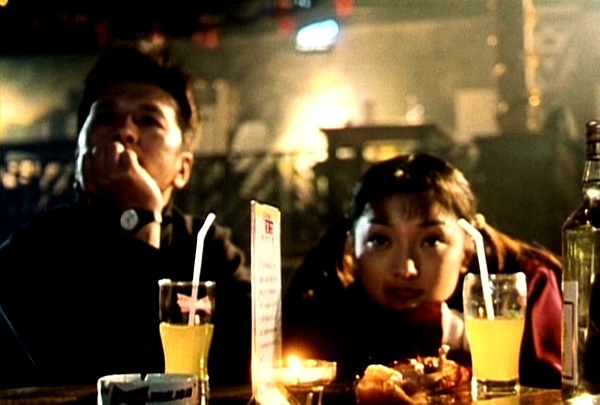 At the very beginning of Lou Ye’s Suzhou River (Sūzhōu Hé) the unnamed and unseen narrator and protagonist whom works as a freelance cameraman tells the viewer that he is fine filming anything just so long as the client doesn’t complain. His camera, he says, shows things the way that they are. This statement recalls that famous one of Bruno Forestier in Godard’s Le Petit Soldat (his second feature film and first to star his muse and future wife, Anna Karina), “La photographie, c’est la vérité, et le cinéma, c’est vingt-quatre fois la vérité par seconde” – “Photography is truth, and cinema is truth 24 times per second”.

A pretty sentiment, but ever since the first images were commited to film, artifice has always had a hold on the camera. Amongst the earliest films of the Lumière brothers, we see that iconic scene in which a train pulls up to the station, a real event no doubt, but there is a bias there in the timing and the editing that presents the scene as one singular event. Even documentaries, which by their very nature attain a sort of higher level of truthfulness, engage in a similar kind of bias and we should always be wary of their honesty, a lesson learned from Flahery’s Nanook of the North (although, it must be noted Cinéma vérité attempts to correct these problems). The image that we see on the screen, however truthful, is always through the camera’s eye, making the truth as murky as the river after which Lou Ye’s film is named. Artifice is at the heart of Suzhou River.

The film is clearly influenced by Hitchcock’s Vertigo, another film that heavily relies on artifice as a narrative technique. In the film, former detective John “Scottie” Ferguson (played by the all-American Jimmy Stewart) is hired by an old acquaintance to watch his wife, Madeline (Kim Novak). The film takes on a voyeuristic quality as Scottie follows her, leading up to a suicide attempt on the Golden Gate Bridge where he jumps into the water to save her. He is however unable to halt her next attempt at suicide due to his vertigo, as she jumps from the tower to her death. As a result, Scottie becomes depressed and begins to haunt the places where he used to see her even though he knows she cannot possibly be her; he becomes obsessed with finding her, and then on the street he sees Judy Barton (also played by Novak), Madeline’s doppelgänger. In her dual role, Novak underscores the artifice that fuels Hitchcock’s film, as she is both the cause and later object of Scottie’s obsession. She fools both Scottie and the viewer, as when taken at sight alone, the truth of the image is that she is Madeline. When he finds that isn’t the case, Scottie tries to transform Judy into Madeline in an attempt to make that truth a reality. The untangling of that artifice in the film’s dénouement lifts the veil from our eyes and reveals the actual truth behind the film’s mystery.

Lou’s film, like Hitchcock’s, revolves around a love affair that borders on obsession. The narrator tells us the story of Mardur, a motorcycle courier hired to transport Moudan (played by one of the four young Dan actresses, Zhou Xun) to her aunt’s and back when her rich father is entertaining one of his mistresses. During these encounters the pair fall in love, but things go sour when Mardar becomes involved in a plot to kidnap her for ransom with a former lover and another man. After the ransom is paid, Moudan runs away with Mardur giving chase, ending in a jump from a bridge that mirrors that of Vertigo, only this time Mardur doesn’t save Moudan as he can’t find her after jumping into the water after her. Years later, after serving some time in prison for the kidnapping, he returns to Shanghai to look for her and the cinematography begins to take on a voyeuristic feel. Unlike the steady camera work and beautiful settings of Hitchcock, Suzhou River’s is very urban and gritty, with a sort of shaky camerawork that recalls Christopher Doyle’s work in Wong Kar-wai’s Chungking Express. Mardur’s search eventually leads him to the narrator’s girlfriend, Meimei (also played by Zhou Xun), a go-go dancer who performs as a mermaid in one of the city’s dive bars.

Mardar’s obsession with finding Moudan transfers to Meimei despite her insistence that she does not know him, and both the viewer and Mardur are left wondering as to the truth. The artifice of the scene, the seemingly impossible similarity between Moudan and Meimei, makes the pair inseparable. Meimei’s role as a mermaid, a theme that runs throughout the film as people on the river report seeing a mermaid after Moudan’s jump from the bridge, is also interesting in that it is a Western concept. It is rather indicative of the sixth generation’s move away from the fifth’s fixation on Chinese problems (in films like Chen Kiage’s Yellow Earth and Zhang Yimou’s Red Sorgum) towards more global ideas. In this way, Lou takes in American influences like Vertigo and film noir and produces something, that while lacking the power of Hitchcock’s film, succeeds as an interesting film. The fact that it’s ending diverges from Hitchcock’s, does do it some favours. As Rosenbaum notes, the film succeeds as a sort post-modern fairy tale, as a meditation on the role of narration and artifice in film. Artifice is something that we can perhaps never get away from, but that doesn’t make it a bad thing, it just adds another layer to our experience of the film.