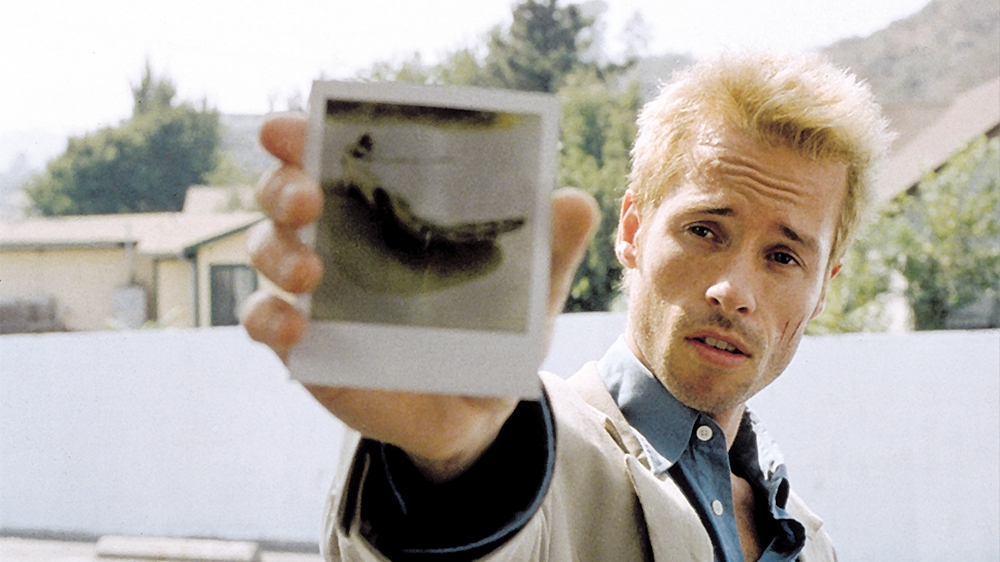 It’s time to spring forward, as the saying goes. What daylight savings actually saves is beyond me. Just another way of making me wake up earlier than sunrise. Twisting time has worked a whole lot better in crime cinema.

I’m not talking about the usual flashbacks mysteries throw in to pad their plot and shoehorn in some exposition. Plenty of crime film breaks the laws of quantum physics as blatantly as they do federal and state statutes. A handful manage to pull it off with style.

From crime movies that turn the clock on its head, rewind it and overlap it, or downright melt its face right off, these are 12 Time-Twisted Crime Films.

The Usual Suspects were anything but when it first came out, using a shifty narrator to bend the audience’s perception of events. Told piecemeal by the sole survivor of a disastrous shipboard robbery, the film is presented as a puzzle. As the survivor’s facts are challenged, the story changes. Reality is built from an ever-changing stack of evidence and nothing is solid. When the climactic reveal that spawned Kevin Spacey’s career hits, every preceding second can be poked at to see whether it was made up on the fly or actually happened.

The 1999 fringe classic, Go, lives up to its name, flying along at a frenetic pace, and it does so along three separate storylines happening at three different times. As the plot threads burn rubber toward the darkly comic ending, Go gives us glimpses at facts that explain events we’ve already seen. With a solid cast of sleeper stars and a crisp script, the film keeps the pace pounding until all the facts smash into each other at the end. The result is a sharp zig-zag of reveals that leaps around the clock while keeping the minutes flying by.

Tarantino loves to punk the clock just as much as he does his audience’s sense of decency, and Pulp Fiction is where he first got to show off his non-linear skills. The narrative is fused out of three stories brought together by interlocking characters – stories that end where the film begins. In a way, it’s like Go with book-ends, its climactic scene delivering deadly pay-off for the fatal threat established in the first scene. Tarantino’s best-received work, Pulp Fiction packs superstars into the slick loafers of its little criminals and sends them banging into each other over the course of three plots that send us into the deep future and near past: A pastiche of a hardboiled pulp world.

Of course, for more time-defying storytelling from Tarantino – and this author’s personal favorite – check out his debut film, Reservoir Dogs.

Another cult classic from the King of Edgy Ensembles, Jim Jarmusch, Mystery Train is another seamy triptych – a three-part story like Go and Pulp Fiction – that scores higher points on our list with its brooding surreality. This gritty ode to the down-and-out dreamers of Memphis, Tennessee, follows characters from all points of the globe, until finally sewing them all together. Riding the common theme of seeking the King, Elvis, the three stories travel at wildly different times and paces to arrive at the same tragic place.

In this crown jewel of Akira Kurosawa, the gruesome collision occurs before the film even starts, and the audience relies on shifty witnesses to judge what happened and why. A rape and a murder call for justice, and executing the guilty party depends on the testimony of the woodcutter, wife, bandit and samurai involved in these disturbing events. Even the victim is given a voice in this five-storyline icon of film lore that inspired many of the titles on our list, most notably Tarantino’s work. Shattering both straightforward storytelling and notions of guilt and innocence, Rashomon is the grandfather of this clock-defying list.

Now we range into truly strange realms with this quiet tour-de-force of infidelity and revenge. Writer of 44 Inch Chest, Louis Mellis, isn’t just the voice of a Sith Lord in a Star Wars online RPG. He’s also one of the weirdest artists in crime cinema today, with his most famous effort, Sexy Beast, sprinkled with surreal dream episodes that haunt its hero. 44 Inch Chest infuses those dreams into the tormented protagonist’s waking life. Told from the end of an affair, a thug and his infighting criminal pals are about to exact payback on his unfaithful wife. But the plot veers into his fantasies of suspicion, facts are portrayed in flashbacks that often contradict, and soon no one is reliable. A challenging but gripping discourse on the devouring nature of doubt, 44 Inch Chest makes time seem less of a fact and more an arbitrary perspective of passion.

See the Sea, François Ozon’s Regarde la Mer, is another subtly eerie effort from the French film’s master of misdirection. One of his first efforts, it lets time roll in and out like a tide, looking at moments of a mother’s experience as a sinister drifter intrudes on her and her infant. Time is made a slave to tension, with facts and scenes arranged to build up our fear gradually. When the final image arrives and the whole picture is made clear, it’s hard not to drown in despair. Like Go, See the Sea lives up to its name, allowing us to serenely follow a crime’s eddies and flows, until the vastness of it overwhelms.

This ’70s Sci-Fi brings together one of the most classic criminals with an equally original icon of time travel. Time After Time stands apart from other offerings on its list in that it’s a straightforward account. The plot it follows, however, depicts Jack the Ripper (David Warner in a characteristically splendid performance) escaping capture by seizing H. G. Wells’ time machine. Wells (Malcolm McDowell in one of his few heroic roles) pursues the ripper to San Francisco, 1979, only to find he’s slaying again. Crafted with wry social commentary, quotable lines and solid actors, Time After Time is one that shouldn’t be lost to the ages.

Even more memorable than Time After Time is Following, Christopher Nolan’s first major film and an astounding example of his time-bending narrative powers. Memento, the follow-up to Following, is far better known and also not to be missed. Its hero has a shattered memory, giving him only the shortest of short-term recollections, but he obsessively hunts his wife’s murderer all the same. Ruthless, cleverly written and as compelling as they come, Memento guides us by tossing puzzle pieces of recollection our way, until the complete tragic picture comes into view. Leaping forward and backward but always spiraling down, this grim offering is an omen for the super-filmmaker Nolan would become.

If anybody ever claims nothing scary ever came out of Canada, call bullshit on them: The Dark Hours, a depraved straight-to-DVD flick, uses twisted time as a weapon to terrify the audience. As with Memento, our protagonist has a damaged mind – a brain tumor that, as the film goes on, makes her suffer from lost time and perverse daydreams. A psychopath shows up to inflict sadistic psychological games on her family, which does not help her grasp on reality. SPOILER ALERT: I found the ending disappointing, but the wind-up was an exquisite illustration of brain damage using patchy and broken chronology as one its brushes.

A favorite of your remorseless author, Irreversible isn’t just fit for our Sickest Sex Scene list: It makes the grade for one of the dozen time-twisting films in that it is told backwards. Beginning at the monstrous climax of a crime spree, Irreversible winds backward along a chain of scenes that reveal how everything came about: Character arcs in reverse, conflict in reverse, tragedy in reverse. This is a marvelous exercise in storytelling, turning disgusting high-action back toward a time when things are happy and promising, with no hint of the dread to come. Few films can inflict such despair by ending on a vision of joy. If you can buckle down, knuckle up and hold fast for the turbulent and stomach-turning beginning, you’ll be treated to a truly unique storytelling method.

It doesn’t get more “unique” than David Lynch, a dude distinctive in his love for the surreal. Of his crime films, Mulholland Drive is by far the cruelest to Father Time. As we follow an amnesiac starlet from an assassination attempt into the life of a plucky waitress set on helping her out, all sense of reality dissolves. Midway through, time wrenches back to the beginning, and we follow a phantasmal other narrative. Soaked through with surreal suggestions that life is a waking dream and time a wandering force within it, Mulholland Drive doesn’t just twist the course of the clock. It smashes it into bits and scatters them into something beautiful.