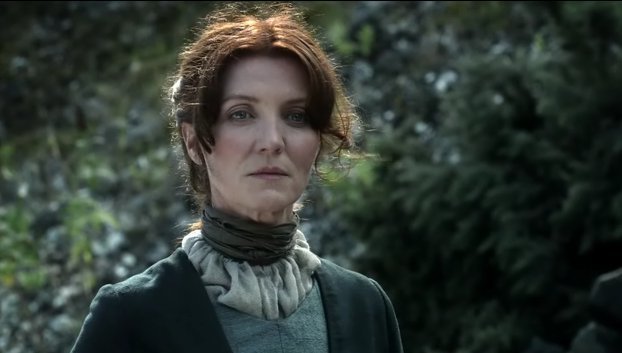 She’s new,. She’s the  newbie,. She’s  g-mashin’ George R.R. Martin’s A Game of Thrones and getting here POV on. Today she moves on to Chapter 18, a Catelyn Stark POV chapter.

You can also read my interview with George R. R. Martin if it pleases you

A Game of Thrones Chapter by Chapter Read and React

All right, let’s talk about Catelyn. If we have to.

That sounds more resentful than I mean it to be. For as much as I dumped on her after her last chapter, the thing is–I’m over it. For now, at least I’m simply bored by her. I have no interest in her feelings or her short-circuiting logic, but it’s more of a mental eye roll than anything that stirs my emotions. For now. I kind of expect she’s going to end up fucking something up royally enough to reignite my prior feelings about her, but for now she just sort of bores me, and I’m solely interested in the plot points that develop in her chapter.

So let’s talk about those.

First of all, her getting apprehended (essentially) when she got to King’s landing was hilarious. Yup…that figured, was pretty much my thought. She just didn’t try very hard to be evasive, did she? How naïve is this woman? If she recognizes that her message might be dangerous and that her being at King’s Landing when she’s supposed to be at Winterfell is suspicious–which clearly she does when she chooses not to present herself to anyone in the city–then she ought to put up some sort of deflection. I mean, if you’re Catelyn Fucking Stark, and your showing up at King’s Landing is going to be suspicious, there’s really only two ways to go about it: extremely obvious, best defense is a good offense style, or truly incognito. Either she rolls up in there with an entourage and goes straight to the palace and demands a room while she waits for Ned and acts like she belongs there, or she travels under a different name and takes a room at like every hotel she can find and actually obfuscates who she is and what she’s doing. The fact that she doesn’t do either, or something else that even makes a pretense of competence at evading unwanted notice, just sort of proves how inept she is at court politics and intrigue. Is this because she’s been left up at Winterfell so long, out of that mindset and out of practice at subterfuge? Or was she never good at it, and her parents saw that and sought to protect her from herself by marrying her off to a Stark so she’d just be out of the way?

(My money’s on the latter. Poor Petyr never had a chance if her parents thought his cleverness might end him up at court.)

My marginal comment when Petyr’s history with her came up was, “Wait, somebody actually LOVED her?” But that’s no doubt unfair. I mean, Catelyn is beautiful and for the most part dutiful, and from what I’ve seen of men in this society that seems to be the top two attributes for the ideal wife. And he knew her when they were children–he was 15 the last time she saw him–so he probably didn’t know too many others to compare her to. Also, considering Catelyn is pretty much the stereotypical woman in this culture (again based on what I’ve seen thus far), there’s probably not any sense that she’s something she shouldn’t be or isn’t something she should be. I just personally am incredulous at the idea.

I wonder what ole Petyr thinks about her now that she’s all grown up and can’t misdirect anyone to save her life? Does he find her abject, or is he still in love with her?

Speaking of Petyr…I distrusted him on sight. I’m not sure why. Maybe he’ll grow on me. Probably just that anyone who is the spymaster’s go-to guy is probably shady.

I was surprised that she tried to lie to him about why she was there with such a weak excuse. “May a lady not yearn for her family and children?” Er…if that was why she was there, why not be there openly? Her clumsy attempt at secrecy only served to make her reasons for being there even more questionable.  I find it amusing that with that line she was trying to play the “oh, I’m just a silly female” line while thinking herself so much more, when in reality that is exactly what she is in a less vacuous way. The problem with Catelyn is that she’s smart enough to get herself into trouble but not smart enough to to get herself out…she thinks like one layer deep when she needs to be going three. But she doesn’t seem to realize there’s more than one layer till the next one trips her up…and that’s a dangerous self-perception to get wrong. If she didn’t, she might have known that she wouldn’t be able to keep her visit a secret and sent someone else.  There is nothing whatsoever suspicious in a messenger from Winterfell waiting for Ned at King’s Landing, given he’s the Warden of the North and might want news of his holdings, not to mention that he left a possibly dying child behind and would probably like an update.  What made it suspicious was that she went herself, and was so arrogant about her ability to prevent someone at court from finding her that she didn’t bother to think up a plausible cover story for the eventuality of being asked.  Also, why the fuck did she even send Ser Rodrick to the palace at all, instead of just waiting until the king and Ned came back?  Surely that’s the sort of information that a quick question to the innkeeper or someone on the street could answer–has the king returned? If yes, you send Rodrick to Ned, and he’s a plausible messenger for important news from home, if no, you just fucking wait until they get there.  Why is that so hard?

Ugh.  And here I thought I was just bored…instead her obtuseness is pissing me off all over again.

The other character I want to talk about is Varys. Is he the same sort of dreamer that Bran now is? The constant bird references hints at that, but he could also just be a really effective spymaster, too, I guess. But given the number of other dreamers Bran saw dead, there are obviously others of them in the world, and it’s not exactly a stretch to think that someone like that would rise high in the king’s service.

The one big development (besides the fact that Ned will get to King’s Landing to find his wife ransomed by the Queen’s minions) is the reveal at the end of the chapter that the knife used in Bran’s assassination attempt was from Tyrion Lannister. Hm. So many possibilities.

Did Tyrion do it? If so, why? Was he attempting to protect his brother? Was he hoping that the attempt would be foiled and the Starks tipped off that the Lannisters are an active threat to them? Did he feel sorry for a little boy who might wake up crippled if he woke up at all, and wanted to put him out of his (potential) future misery?

Or did Cirsei acquire the knife from her brother? Did she steal it from him, or did she ask him for it? Was it because she could get to it and she was just using the tools at hand? Or did she want to maybe cast some suspicion onto him and away from herself and her twin? If he gave her the knife, did she explain what she wanted it for–and if so, why did he give it to her for that purpose?

I honestly can’t even come up with a good theory on this one. I just can’t. I am inclined to believe that is where the knife actually came from, since there’s that whole “does Martin like to undercut characters” question still hovering in my mind, and Tyrion trying to assassinate Bran is pretty much WTF-ery in action. And it seems like he would be hard to make a patsy of. I mean, I guess if Petyr  is in Cersei’s camp and knows Tyrion’s going up to The Wall so won’t be around to deny anything, he’s figuring it’s a good time to scapegoat Tyrion and knock him down on behalf of the sister who hates him. But, like, plot-wise, it feels legitimate that it was in Tyrion’s possession and that Tyrion probably had a hand in what went down, because it’s a surprise turn in a book that I’ve been told is built on surprise turns. I just don’t know what angle he was after yet.

So there’s that development in place. Now let’s get the eff onward from boring-ass Catelyn and back to someone I actually like spending time with!