Much like most of the civilized world, I knew what yesterday meant:

The premiere of Sons of Anarchy, Season 5. I was pretty jazzed. I would DVR that bad bastard and catch it when convenience struck. Or, if I was too lazy or forgetful to do that, I could snag it On Demand. I wasn’t sweating.

It was just a biker show, after all. A good one, sure – great in some ways – but just a heavy-caliber, low-taste drama about leather-clad motorcycle thugs.

Except that, when I got into the office, you could hear the growl of SAMCRO engines everywhere. It wasn’t just the rowdy Rams fan in the cubicle next to me, who had “SOA 1%” up on his white board in black marker. I could hear the break room buzzing with episode recaps and series synopses. People were marking their calendars, gunning their throttles, waiting for the big night to arrive.

All this, I marveled, just to see Hellboy, Peg Bundy, and the acrobatic albino from Cold Mountain act out a modernized version of Hamlet.

Turns out, it was as big an event as I expected. Bigger, even. According to the releases today, the Sons of Anarchy Season Five premiere hauled in 5.37 million viewers, most of them between the ages of 18 and 49. If you throw in the encore episodes and the preview showing of last season’s finale, that number climbs to 7.5 million total.

That’s not even counting no-accounts like me, who will tune in at their leisure. It was the largest single night in FX TV drama history. That’s saying something, coming from the network that brought us The Shield and Justified.

It got me thinking whether this perfect storm of viewership was due to a perfect formula in crime writing.

After all, Sons of Anarchy is based off of one of the most successful crime plays ever. The bard had a righteous thing going with the noir story of the prince of Denmark, more so than he did with Titus Andronicus, or even “the Scottish play.” Over every other grim work from Shakespeare, save Romeo and Juliet, Hamlet has held an undisputed claim to infamy.

So did Kurt Sutter use a formula to turn film into gold when he relaunched this classic as a rough-and-tumble gang drama?

I think he did. We can pick it apart into its elements, and a lot of them prove to be dramatically explosive.

We’ll get the dirty laundry out of the way: A crime story has to have an accessible group of central characters, and that means targeting your demographic. In this case, Sons of Anarchy sets the spotlight on outlaws that look like the racial majority of the nation. It may be an unsavory truth, but it ain’t just Wonder Bread ethnocentrism. There’s a reason that the most successful Telenovelas don’t feature an all-Indian cast, or that Bollywood goes for locals with fly dance moves over a cast of Siberians. Your principal characters resemble your principal population if you want to score big.

That’s just the tip of the low-brow marketing iceberg, though. Next up, you need to involve some kind of romantic triangle. Not everything need be all Bella-Edward-Jacob, though. You can get Freudian if need be. In the case of Sons of Anarchy and Hamlet, the core triangle is between a mother, her husband, and the son that she helped screw over for the sake of power. But whatever the case, the central players need to be tied to one another by heavy heartstrings. This makes the crime story difficult to disentangle by pitting one against many. Shifting loyalties and constant heartbreak amplify the drama of the story.

Next up, you’ve got to have revenge. Why? Believe it or not, revenge is the honey that draws the flies. It takes a certain kind of sordid viewer to watch bad people doing bad things for purely selfish reasons. Tracy Letts can manufacture enough dark magnetism to woo critics and win awards with his all-rotten casts in films like Killer Joe and August: Osage County, but that isn’t playing in Peoria. To grab the masses by the chest, you need to fire up their sense of right and wrong. You need a good revenge plot at the center of your story – wrong one of these bad dudes so that audiences can relate to him or her, and then let them loose to wreak disaster. Whether a superspy like in the Bourne series or a family man like in Taken, doing wrong to a killer can justify just about every brutality can you dream up. Such is the case with Sons of Anarchy, which has run on the plot of Jax avenging his slain dad since day one. Since then, our wayward prince has broken plenty of the laws of common decency in his quest for revenge and he’s been cheered on the whole way.

Last but certainly not least, you’ve got to deliver a teeth-jarring dose of sex and death. For all you doubters out there who say that things were different in the more refined days of yore, I’d shoot back that the essential themes were still there. Even in Hamlet, Ophelia served the purpose of adding a hint of nubile romance and tragedy over love lost. As for the body count, Shakespeare’s tragedies didn’t skimp. The same holds true for the classics of 20th century crime film, with The Godfather having automatic weapons fire and a healthy dash of ass, Taxi Driver delivering much the same in a far more unsavory way, and plenty of other, less-acclaimed blockbusters following suit.

Wrap it all up in a package that’s just smart enough to dazzle and just dumb enough that suckers can follow the plot, and you have an instant hit. The audience will identify with their similar-looking bad-boy hero, live out their dark power fantasies along his quest to set wrongs right, and enjoy the scenery as people get physical.

It may take brilliance to craft a cast, episodic format and production value like Sutter did with Sons of Anarchy. But it also takes someone smart enough to not over-think the winning formula.

The same high-octane blend that left Greeks slack-jawed over Herakles’ gory quest to free his captive wife and kids from the once-kindly king that betrayed him is driving shows like Sons of Anarchy to epic success. 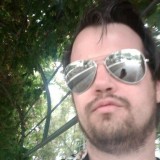 +Matthew Funk is a social media consultant, professional marketing copywriter and writing mentor. He is the editor of the Genre section of the critically acclaimed zine, FictionDaily and Full Stop. Winner of the Spinetingler award for Best Short Story on the Web 2010, M. C. Funk has been published at numerous sites online, indexed at his Web site, and in print with Needle Magazine, Howl, 6S and Crime Factory. He is represented by Stacia J. N. Decker of the Donald Maass Literary Agency.