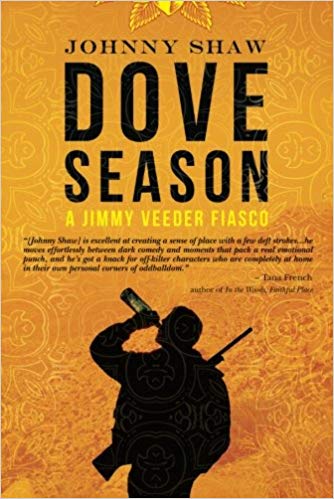 I think that I found my voice—or at least my confidence—when I was a graduate screenwriting student at UCLA. Although I had been writing for a number of years, it was at UCLA that I pushed myself and understood and accepted failure as a positive possibility. Good writing is ambitious. Which means that good writers must be willing to fail.

I had one professor that specifically pushed me forward. Not because of any answers he offered, but because of the questions he posed. This professor was a bit eccentric (no kidding, he once taught a three-hour seminar with a parrot on his shoulder), and his feedback on people’s work was often in need of deciphering. But for me, I walked away with a number of great questions that I still ask myself as I write. After all, aren’t questions always more interesting than answers?

We were in class one day, a small graduate seminar. Someone read their most recent pages. The scene opened with a man walking down a dirt road. There’s a farm with a cow and some chickens next to the barn, the sun low in the sky. An old barbed wire fence and a rusted-out hulk of a tractor. A quiet, idyllic scene that took about two minutes, but nothing happened.

We listened attentively, nothing really wrong with the pages, well-written. The professor sat up and said, “You know, that’s a beautiful description you’ve written. I could see the scene clearly. But, the way I figure it, you may as well have him fuck the cow.”

That was it. That was the extent of his feedback. And one of the best lessons I ever learned.

The other students laughed or found it insulting. Some people thought because the scene lacked conflict, he dismissed it altogether. Maybe and maybe not, but there was more to be taken from our professor’s statement. At least, I think so.

It is my belief that he was trying to get that writer to surprise himself (and because you’re thinking it: no, I wasn’t that writer). To not play it safe. And to not dismiss some of the marginal thoughts for a story.

Occasionally I’ve heard people say, “There are no new stories,” or that there’s some idea that “there are only twelve stories” and everything is a variation of those structures. Most of you already know that’s a bunch of horseshit. If that were true, my story about a dwarf lumberjack who becomes an astronaut and eventually learns the true meaning of Christmas wouldn’t exist (I await your call, Mr. Studio Executive).

Great writing cannot be created without risk. Great art cannot be created without risk. Originality is hard, because it is risky. By definition, if you are creating something new, you are in uncharted territory. When you are attempting to do something original, you are more likely to fail. However in my book, the attempt itself is success. Because when it works, you’ve created something that is entirely yours, that wouldn’t exist unless you had created it.

Anything less would be to aspire to mediocrity. The worst thing you can be as an artist of any kind is middle-of-the-road. Because you’ve failed from the start. You’ve failed by being ordinary. Easy is for assholes. Don’t fuck your way to the middle.

The professor that suggested the cow-fucking above offered something that would have never occurred to the writer. Probably the wrong note for his story, but what if he took the advice? I’m thinking that story would be pretty unique. That’s what we, as writers, have to do. Allow ourselves to go in directions that we’re not necessarily comfortable going in.

Have any of you censored yourself? Not written something because you were afraid you would offend? Reveal too much? That it was only funny to you?

That’s self-censorship of the worst kind. When you write, you write for yourself as the only audience member. You write a movie you would pay to see, a book you would buy in hardcover, a play you would wait for in line in winter. “Bad” or “Good” is for other people to decide. The most important thing is that it is yours.

Believe it or not, a lot of writers write stories they would hate. Seems crazy, right? I guarantee some of you are doing it yourselves. What happens is you start writing for other people, second-guessing what “they” will like. That’s a sure path to mediocrity. If you’re going to fail, fail spectacularly, not ordinarily. Jump off the building, not the stoop.

I can write jokes all day that will make my mother laugh. I might not find a single one of them funny. That’s craft. That’s experience. That’s also dishonest. It’s fake. I’d rather write a joke that cracks me up that nobody else gets (and trust me, it happens more than I’d like to admit) than a joke that kills, but I don’t find funny.

I guess that’s what this long rant was supposed to communicate. Don’t settle. The whole reason why we write is to see where our brain will take us. Get crazy. Go too far. Write about things that surprise you. Get out there and fuck that cow.