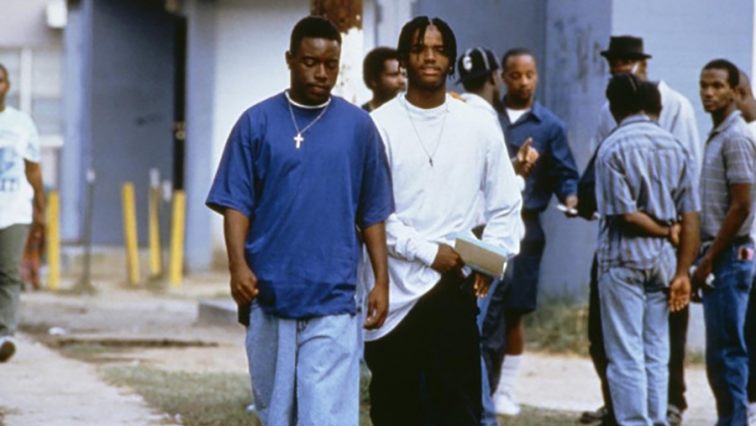 So,  the thought came to me that it might be appropriate to have a section of the site devoted to the “gangsta” movies that began in the early nineties with flicks like Boyz N The Hood.

Then I sat down to type it out.

A little bit about me.  Inside and out, I’m basically a goofy white kid from the Midwest whose hair has gone gray.  I grew up in a small town and moved to the big city later in life. I write short fiction that is, to a large extent, about guys shooting each other or double-crossing each other, or dealing dope, or heisting a this or a that.  Never done any of it.  Can count the number of times on one hand that I’ve shot a gun and write you a detailed account of each instance, and not a one of them will hold your interest.  I’m definitely not from the “write what you know” school of thinking.  Frankly, after 37 years, I don’t know shit.  I write anyways.

All that said, I still found myself having a rough time applying my South-Bend-Indiana-by-way-of-Kalamazoo-Michigan worldview to the streets of Compton, Watts, and Brooklyn.  Yeah, I know.  Hard to believe.

Part of the issue was that, at the time of their release, these movies were laid out to me and my suburban, largely white friends as important documents of social commentary rather than pieces of entertainment, or even art.  There was this whole earnest weight to them.  It started with New Jack City (which doesn’t really fall into the genre, but it was the title card after which everything that followed was filed) in 1991.  There was finally a movie that addressed what was going on in the Streets at that moment.  Which was great, it just wasn’t where I was.

So, just to put a capper on all the self-conscious bullshit, the genre gets a space here because it deserves one.  And basically, I really dig these movies, you know, as movies.  In Menace II Society, for example, there’s scene in which Caine’s father, portrayed by Samuel Jackson, demands money owed from a friend fresh out of the joint.  It’s a disturbing scene, no doubt representative of a lot of very grim things that were going on in Watts in the early ’70’s.  It’s also one of the funniest scenes you’ll ever see on film.  And this was before everybody knew that Samuel Jackson in a scene that took place in a smoke-filled room would automatically end up with somebody dying violently.

I’m starting with Menace because I feel like it’s where the genre’s nuts finally dropped.  Boyz N The Hood is a damn good movie, but when you get down to it, it’s basically a very violent After School Special, in which the protagonist, Tre Styles, is a good kid with a good head on his shoulders (in spite of his name), being raised by divorced-but-on-good-terms parents, who is struggling to get out of the ghetto while everything around him seems to be holding him back.

In Menace, Caine comes from a different situation than Tre.  His mother was a drug addict and his father a murderer (perhaps many times over, as it is alluded to in an early voice-over), and both are dead by the time he graduates from high school.  He lives with his grandparents, deals drugs, and is not one to shy away from trouble.

Caine is close friends with O-Dog (brilliantly played by Larenz Tate).  O-Dog is batshit crazy.  The tempo for his character (and the entire film) is set in scene one when O-Dog commits double homicide on the owners of a Mom-and-Pop Korean liquor store.  O-Dog retrieves the security tape from the store’s closed-circuit television system, and for the rest of the movie uses it as a personal highlight reel to impress his buddies.

Menace II Society is brutally violent from the very beginning to the very end.  Early on, Caine gets shot in the course of a carjacking in which his cousin is killed.  Tyrin Turner’s depiction of a character suffering from a gunshot wound has never made me want to get shot less.

In no time, Caine gets vengeance on the two who killed his cousin, and sets off on a determined course of drug-dealing, carjacking, and murder.  The few positive influences in Caine’s life are drowned out by the wicked, and by the time Caine has finally gotten a grasp on the fact that he is headed on a determined path in the wrong direction, it’s too late.

Turner and Tate create a fully believable foundation around which an adept supporting cast create a convincing backdrop.  The cameos by Jackson at the beginning of the film, and an all-too short appearance by Bill Duke as the homicide cop investigating the liquor store homicides from the opening scene, are standout moments.  Duke is bone-chilling as he interrogates Caine and crosses him up with the timeline of the murders.

As for its place in the pantheon, I put it at the top.  There is a lot of humor amidst the hard times, and the moral of the story is arrived at through the course of the action, rather than being shoved down your throat.  My only nitpick would be that a lot of the dialogue, particularly at the beginning of the film, seem to be cut-and-pasted from some type of Thug Life Idiom Dictionary, but the movie quickly sets into a natural pace and rhythm.

Menace was the first film made by the Hughes Brothers, which is another point of comparison with John Singleton’s initial offering of Boyz.  From a standpoint of blocking, cutting, and editing, Menace certainly appears to be the more sophisticated film as well as the most successful in terms of capturing a tone that feels “authentic.”

‘Cause you know, I would know.