Boomtron recently got the chance to interview up and coming actress, Michelle Page. At age 24, she has gotten many great performances under her belt with more on the way. She talked about being an actress in different medians and working with other actors.

Michelle began acting at age 8 in various theater performances where she earned much praise. She has gone on to guest star in shows such as Bones, CSI: Miami, Cold Case, and Castle. She also recently filmed a guest appearance in the show CSI: NY that will run October 7th. She also has several films that are set to come out soon.  This extremely talented actress has a huge future ahead of her and has secured her self as a rising star in the acting world.

So you started performing at age 8 in theater productions, but what made you decide to become a full time actress?

Michelle Page: My parents instilled in me a love for theater at a very young age. At eight, I began performing in major professional productions in Dallas-Ft. Worth. I knew then that this was what I wanted to do. I continued working in theater, commercials, and eventually, moved to Los Angeles to work in television and film. Even today, it’s still what I absolutely love to do.

Your first major film was with Sandra Bullock in Miss Congeniality 2, what was working with her like?

It was great working with a fellow Texan! It was my first feature film, and working with Sandra Bullock was HUGE to me. She is so sweet and smart, and I feel really honored to say I’ve worked with her.

You do a lot of television work such as commercials and roles in TV shows such as Bones and CSI. So do you prefer television roles or movie roles?

That’s a hard one! Film and television are both so different. Film, you have more time to develop a character and the opportunity to be extremely involved with the process. What I like about television is that it has become so groundbreaking. More and more amazing series are coming out continually, and I like how fast-paced it is. I’d have to say I don’t prefer one over the other. I like them both!

Which show was your favorite to star on?

My recent CSI: NY guest star, which is airing October 7, was great! Gary Sinise is one of the nicest actors I’ve had the opportunity to work with. I think my all-time favorite was Cold Case. My role was really dynamic, and I thought it was a beautiful and moving episode.

If you could guest star on any of the shows out right now, which would you pick?

Breaking Bad or Dexter! The casts are extremely strong and talented, and it would be so exciting to be a part of those edgy shows. There’s an upcoming new show, Prime Suspect, starring Maria Bello that I think would be great to guest star on, as well. I love strong female roles and especially love crime dramas.

You worked with Bill Moseley, who is a personal favorite of mine, as the lead in Rogue River. What the most challenging part of filming that movie and the most rewarding?

Bill Moseley is wonderful! The entire cast and crew was such a family. Rogue River was a real passion project for all of us. We were in Southern Oregon for nearly two months during winter, and the weather was definitely the most challenging. For a good part of the film, I’m running around in the woods in a little dress, barefoot, with snow on the ground, and a stunt gone wrong caused me to end up in the hospital with a concussion. So, while it was physically challenging, to say the least…it was rewarding, because Lionsgate is releasing the film early 2012!

You have a few new films coming out over the next year or two, which are you most excited about?

They’re all so different. Rogue River is a psychological thriller, and I just completed a dramedy called The Party is Over, which I star in with Kathy Baker, who is also producing the film. The film surrounds three privileged college guys, figuring out life, and each are involved in a different love story. My role of Nia is involved with Kathy Baker’s on-screen son, and I cause their family some problems. It definitely brings the drama into the comedy.

Are there any directors out there you would love to work with?

Which actor or actress do you admire the most?

You seem to work so much! What do you like to do in your free time?

I read that you love to travel, where is your favorite place to visit and would you ever like to live there?

When I trained at the Royal Academy of Dramatic Art in London, I absolutely fell in love with London…I’m going back to visit friends this winter! I’ve been all over Asia – elephant trekking in the jungles of Thailand, hiking in Norway and Sweden, horseback riding across the Rio Grande into Mexico, but to live? I would live in England or France in a heartbeat! 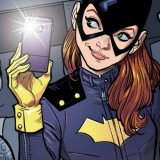 Sarah is the author of "Pop Culture Cocktails," a collection of cocktail recipes for popular television shows across a variety of genres. She continues to drink recreationally and watch television professionally while hanging out with her cats.

Awesome interview! I know Michelle’s work and she is definitely on her way.

Michelle is wonderful and I have enjoyed her work so much!