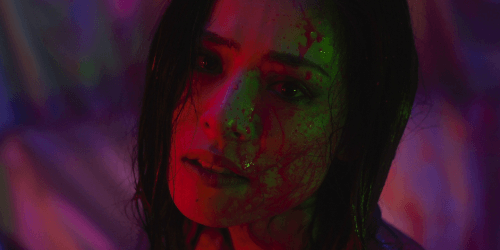 Okay, hands up if you know what a love hotel is? Yeah, right, feel free to skip ahead.

For those who don’t:

A love hotel is basically a venue that you pay for by the hour to go and have sex with someone. They are frequently themed and full of weird shit (I once spent the night in a room with a cage over the bed and manacles bolted to the bathroom wall). It’s essentially an industry built on infidelity, which in Japan is almost as common as a hot meal, so it’s a smart industry at that. Anyway, picking up from last time, Sion Sono’s true crime-ish Guilty of Romance is loosely based on a love hotel murder in Shibuya. We open with detective Kazuko Yoshida (Miki Mizono) arriving at the grisly crime scene where a body has been found and several limbs have been replaced with mannequin parts. The film flashes backwards and forwards from there as the events leading up to the murder unfold alongside the autopsy and detective work.

A quick aside: I’ve read numerous reviews that are critical of Romance. It seems that the Cannes screening was over 140 minutes. The MIFF screening was 112 and perhaps it’s this slightly brisker version that will turn the critical tide. I was not alone in feeling this way—the film played here, man, with a very strong audience reaction throughout (however I just checked IMDB—the only user review was written by a Melburnian. I assume he/she was not at the screening I was at, where pretty much everyone seemed to have a rollicking good time).

Megumi plays Izumi Kikuchi, betrothed to a famous writer of what appears to be pulse-pounding romance novels (played by a suitably dour Kanji Tsuda) who wants her to be the perfect little housewife, a role Izumi’s more than happy to play. It’s a nice stretch for Megumi, a far cry from the vamped-up, microwave dinner-cooking Taeko from Cold Fish, who happily uses her pussy as a means of escaping the dreary monotony of being married to, shall we say, Average Jun. Izumi loves her husband and lives to please him like a good J-housewife should. Only problem is that she’s bored out of her mind re-arranging his fucking slippers every day. Oh, and he won’t have sex with her, he’d rather read passionate shit from his best-selling books at signings than bang his super-hot bikini model wife.

Yeah, this was the part I struggled with too.

Izumi asks her husband’s permission to go get a job, and he agrees it might be good for her to actually get out of the house. She ends up in a supermarket, giving away sausage samples. There she’s approached by a “modelling” agent who tells her she’s way too hot to be feeding people snags and she should come model for her. Izumi does. Porn shoots soon follow, and her transformation begins, going from kimono-wearing housewife to sexed-up, tits-out woman on the prowl (the guys next to me actually gasped when Megumi stripped off, so striking is the transformation), loitering about the love hotel district, gagging for anything she can get with enough yen to spring for a room.

This, by the way, is not quite as ridiculous as it may sound. I drank with housewives. I know people that did way, way more than that, fucking them in the back of their compact little cars. Japanese housewives, out of their husband’s sight, are frequently fun, ready for anything and their man’s money always takes care of the bills as it’s the wife who holds the purse.

The more sexually liberated Izumi gets, the more attractive she becomes to those around her. As the sausages she spruiks in the supermarket comedically increase in size, so too does her appeal to those around her. Things really get crazy when Izumi meets Mitsuko (Makoto Togashi), literature professor by day, street walker by night, who initiates Izumi into a world where fucking equals abandon, commerce and, eventually, self-destruction. Sono’s satirical gaze is so sharp that the soundtrack is even full of the swelling strings of a bad love story, echoing a cheesy romance film, often over the top of demented sequences stripped of all romance completely.

As we noted last time in Sono’s Cold Fish, the breaking of the tight plastic mould that is Japanese society cannot stand. It is, however, a long, strange trip towards a bizarre murder where the sexual freedom of women in modern Japan bumps right up against traditional family values and even the “purity” of a family bloodline.

Fuck the haters–Guilty of Romance is a tremendous, piece of work. Like all of Sono’s films, it’s scathing but hilarious and if you want to lift up that mask and have a peek beneath, both Cold Fish and Guilty of Romance are a great place to start.