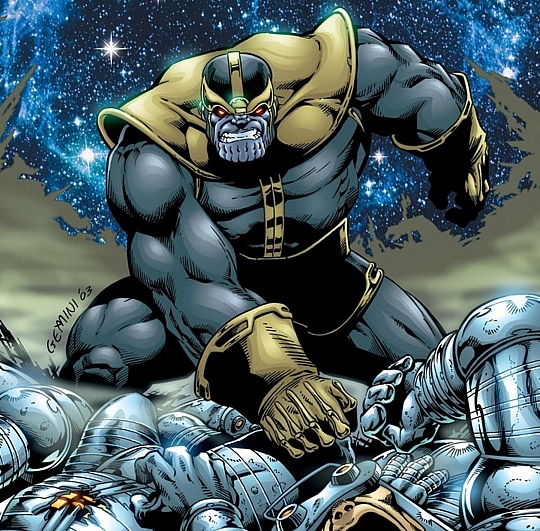 A special edition of Badass of the Week by Ben Thompson

Going out the week of San Diego Comic-Con and telling a bunch of superhero aficionados that Thanos is badass is kind of like walking into a Star Trek convention and announcing that Vulcans have pointy ears. No shit, Professor X, why don’t you tell us something we didn’t already infer telepathically just by looking at a comic book panel depicting a giant, beady-eyed muscle-bound behemoth backhanding Captain America to the turn with one hand while simultaneously head-butting a structural tear in the fabric of the universe with his wrinkly purple forehead?

Ok, well Thanos is named after Thanatos, who was the oft-referenced yet rarely-depicted ancient Greek god of Death and Death-related constructs. In most circumstances this sort of naming convention would amount to little more than the sort of self-aggrandizing pretentious douchery, but in the case of this particular jerky-chomping hardass, a chthonic daemon-lord like Thanatos actually needs to hit the protein shakes and beef up his badass cred just to be able to hold the jock that sometimes contains Thanos’ giant, presumably-purple nutsack.

The mega-ubermench who would go on to obliterate all life in the galaxy roughly a half-dozen times during his career got his start growing up on the mean streets of Titan, the largest moon of Saturn. Life on Titan was a pain in the bitchcakes, thanks in no small part to the fact that the planet-like moon isn’t exactly known for having a whole lot of breathable oxygen, or for not being so ball-shrinkingly cold that it can spontaneously turn your dick into one of those frozen bananas scientists use to hammer nails into two-by-fours. It also didn’t help that Thanos was a huge, awesome purple-skinned Eternal while everyone else was comparatively normal-looking and boringly-human-esque. Thanos harnessed his seething rage until finally, one day when the normal-looking punks of Titan decided not to let Thanos join in any of their stupid reindeer games, the violet behemoth augmented his already-bonkers natural strength with some bionics, started worshipping the female personification of Death, and spontaneously nuked his own civilization into giant smoldering piles of ash and failure to impress her. When he got bored of r0xx0rzing his planet’s giant metaphorical taint with ten megatons of “suck my balls”, Thanos promptly decided he didn’t really have anything better to do than conquer the galaxy and collectively make the entire universe his prison bitch.

While most boring, run-of-the-mill supervillains are content to sit around plotting world domination, plundering multi-billion dollar treasuries, or holding international agencies hostage with their primitive thermonuclear devices, Thanos needed a quest worthy of his stature as one of the most hardcore god-men to ever bodyslam the Incredible Hulk through the surface of the Moon. His first act as the devastating, galaxy-crushing scourge of the universe was to recover the Cosmic Cube – a weird floating translucent box that somehow wielded enough power to obliterate entire star systems. The Mad Titan announced his presence to the super heroes of Earth by running up piledriving them teeth-first onto some tacks, trashing all comers in single combat. Thanos then snatched the Cosmic Cube up, blinked a couple stars out of existence, and then proceeded to kill Adam Warlock, destroy the defenders of Earth, and beat the crap out of both Thor and the Thing at the same time. After proving that the toughest dudes our planet had to offer were a bunch of miserable pathetic wussbags, Thanos got bored, threw the Cube away, and went back to his day job, which, as far as I can tell, involved warping through the universe in a mile-wide intergalactic spaceship so manly it makes the Battlestar Galactica look like a flaccid dong.

In addition to unabashedly rocking out the blue spandex everywhere he goes, Thanos is pretty sweet because he doesn’t seem to need food, air, or water of any kind. Presumably he instead opts to sustain himself solely through a non-stop diet of beating people into bloody piles of meat and fueling himself on the tears of their loved ones and the death cries of his slaughtered enemies. Big Blue manipulates cosmic radiation like he manipulates his nuts, and has occasionally been known to shoot huge-ass energy beams out of his hands and frakulate the numbnuts do-gooders of the universe in their stupid, non-evil faces. During his three-decade reign of terror across the universe, this guy has fought against every major Marvel super hero, killed the Silver Surfer once or twice, cloned himself (like, a lot), had beers with Mephisto, face-punched Odin in a righteous one-on-one deathmatch, and nearly started Norse Ragnarok through the sheer force of his own unyielding murder-hate for all life in the galaxy. He also tried to explode the Sun once, though that plan didn’t work out so well.

When Thanos rolls into town, you know some serious shit is about to go down. Sure, every once in a while some inept bungler gets a lucky shot on him or turns him into stone, but this guy just keeps on plowing ahead and doesn’t let a little thing like having all of his internal organs turned into inanimate material stop him from trying to exterminate all sentient forms of life in the Universe. He’s the sort of mega-villain whose sheer existence is something of a mind-fuck, because it’s nearly incomprehensible to determine how you would even begin to try to take this bastard on.

Never was this more true than in the case of the mind-blowingly awesome Infinity Gauntlet saga. Basically, one day Thanos decided he was going to transcend that whole Cosmic Cube silliness and possess an artifact that had some serious power, so he went around the stars punching people in the dick until he collected six crazy-powerful Infinity Gems. He jammed the gems into his glove, destroyed half the population of the universe with his mind, and busted out some totally-bitchin Supernovas into the habitable galaxies of the cosmos. When the super heroes and villains of Earth all united against this giant purple bastard, he simultaneously took on the X-Men, the Avengers, the Hulk, Dr. Doom and Spider-Man crumpled them all up into one giant ball of twisted metal, lycra, and beef, and slam-dunked it into a black hole. Then he took on Galactus – a cosmic villain whose super power is that he eats fucking planets – and donkey-punched his skull apart like a delicious cantaloupe at a continental breakfast. Next he dislodged the Earth from its rotation around the sun, then pummeled the physical embodiment of the Universe by swinging the space-time continuum around like a lead pipe until everything around him was dead. Thanos was finally defeated when he ascended to godhood, attained a Buddha-like level of consciousness, and then some jerk ran over, stole the Gauntlet when he wasn’t looking and put everything back to normal. Deus ex Machina FTW. I suppose it makes sense though, since Marvel Comics would have been kind of out of a job if they’d allowed Thanos to steamroll their entire stable of heroes and villains and every comic book was just a bunch of pictures of Thanos standing around looking tough (though I’d probably still read it).

But Thanos is just one of those arch-villains who can’t seem to deep-fry a Snickers bar without some quadrant of the galaxy bursting into flames, and the big purple abattoir once again found himself in the middle of some serious shit in 2003, during the “The End” story arc. The short version here is that some obscenely-tough ancient Pharaoh found an item called the Heart of the Universe, ascended to godhood and murdered all the Gods, so Thanos had to roll in and lay the smackdown on that guy’s mummified corpse by grabbing him by the neck and punching the dude’s head off with enough force to shatter the Earth’s crust. After bashing Pharaoh McDoucheBag into some alternate reality where nobody cares how many pointless gods he kills, Thanos then accidentally sucked the entire Universe into his body, obliterating all life in existence except for him. Once again, this guy had succeeded in his admittedly-lofty quest to exterminate reality, and once again he decided to take his foot off the throttle and put everything back the way it was before, presumably just so that he could go back and do it all over again.

Thanos has been around for like nearly forty years, so there’s basically no point in me trying to explain the guy’s entire backstory (though some of the links I’ve provided below are more than happy to walk you through the gory details of everything), so I’ve just hit some of the high points here. Of course, 90% of those high notes involve this guy crusherating large chunks of the universe in the fist of his blinged-out pimp glove, which should hopefully give you some indication of the fact that this guy is just too badass to fuck with.