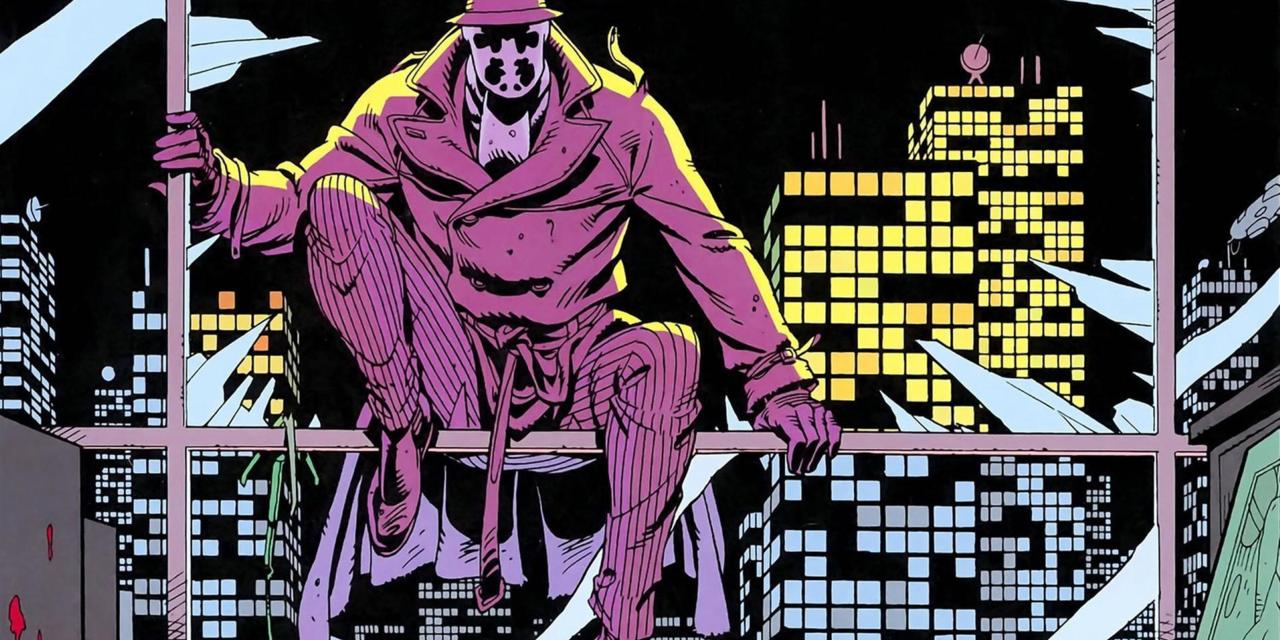 o, who would you rather have operating just outside the law to protect your city?  Batman or Rorschach?  Discuss!

The tale has been told so many times by now that my ninety year old grandfather George could probably rattle it off like the opening of the Bible.

“And lo, in Gotham City did the Wayne family depart the theater.  Passing into Crime Alley, Thomas and Martha and their young son Bruce did cause to become accosted by a vagrant who demanded at gunpoint they hand over their valuables.  The Waynes made to accede to the vagrant’s demands, but were killed anyway, and Young Bruce did watch as his parents fell prey to Crime.  And thus did Bruce train himself physically, and disguise himself as a bat to fight Crime in all its forms.  Amen.”

I’m not a comic book fan.  Let me get that out of the way right now.  The writing, the soap-opera-y self seriousness, the rabid fanboyism the medium engenders.  No thanks.  About the only thing I do like about comic books is their portrayal of women, because grrrrrrrrrrrr….

But for some reason I’ve always liked Batman, and in sort of an oblique, subconscious way that I’ve never really analyzed.  So come along with me,won’t you, while I lay bare my own psyche and study why the Dark Knight is so interesting to me.

I think the first thing that springs to my mind is Batman’s unwillingness to take a life.  So traumatized was he by watching his parents’ slaughter that even though he’s perfectly comfortable with dressing up like in tights and a cape, jumping off tall buildings, and squandering his considerable inheritance on redecorating the cave under his house, the idea of taking a life makes him uncomfortable.

I also like his dedication.  The fact that this brutal slaying he witnessed as a kid affected him so deeply that it resonates even through his adult life, and that he’s willing to spend his entire existence on fighting a fight that can never be won.  There will always be crime, and there’s only one Batman.  If only everyone could set their minds to a task or an ideal and dedicate themselves so singularly to its completion.  The world would either be a lot better, or a lot worse, but either way, I’d have a lot more money.

Additionally, I have to admire a guy who dresses up like a bat and uses a bevy of fun little bat-themed gadgets to fight crime.  Sure, he could join the police force, work his way up to Lieutenant, get promoted to homicide, and draw a fat pension after he retires, but Bruce Wayne’s slightly more extravagant approach to crime fighting employs drama and fear tactics, and goes way beyond what a normal police officer can do.  The Constitution be damned, Crime is the sickness and Batman is the cure!

Plus a good Batman story is never complete without a villain that’s half-goofy, half-terrifying.  And the Batman universe is certainly chock full of those kinds of villains.  I won’t go into naming them because I don’t have the space, or let’s face it, even the tiniest inclination.  But suffice to say there are a lot of them, and every time they show up things get fun and interesting for our favorite bat-themed crime fighter.

Now, let’s take this Rorschach chap from Alan Moore’s “Watchmen” book.  Rorschach is Batman taken to his logical, real-world conclusion.  Take away the high-minded ideals, the flamboyance, the interesting adversaries, and you’re left with a sociopathic loony.  He’s driven by his own demons, for sure, and he’s probably just as effective as striking terror into the world’s criminal element, but he doesn’t have any style, man.  Look at those threads!  London Fog overcoat, fedora, and color changing full-face mask.  He lurks in shadows, he growls and grunts and eats out of trashcans.  Blech.

Further, he has no compunctions about killing people.  Remember that prison riot scene in the book?  My stomach still gets a little urpy thinking about it.  He’s a tiny step above an animal.  If left to his own devices, he’d burn down New York City rather than let it fall prey to the criminal element.  Is that what we really want?

In summary, in the unwinnable fight against Crime, Rorschach is a sledge hammer, and Batman is a scalpel.

Now, it’s a lovely day outside.  Go out and play in the sun, already.

Let me be honest – I’m downright squeamish defending Rorschach for all of the reasons you outlined and more.  In addition to being filthy, violent, and insane, he’s also virulently homophobic, misogynist and so far right that he’s rabid.   It’s mystifying just who (beyond children, maybe?) Rorschach actually feels is worthy of his justice. Why does he fight crime if the city is so full of whores and politicians he’s (in his famous speech) unwilling to save if called upon?

The answer is actually something I can identify with – Rorschach loathes apathy.  It’s the murder of Kitty Genovese (a real life case) that sparks him into making his mask, and jumping into action. Though Kitty is the type of woman he would disdain if he passed her on the street (works at a bar, is a lesbian), he’s furious that no one stepped up to help her.  That’s admirable in its way, particularly since Rorschach isn’t a man of means like Bruce Wayne. All he has is that mask and trenchcoat.

Sure, Batman was moved to action under similar circumstances – no one helped Mother and Father Wayne, the police are too corrupt or spread too thin to do anything – but you could argue that Bruce Wayne has other methods to improve society beyond vigilantism. He could run for public office! He could use his money for welfare programs!  He could have become an actual cop and rose through the ranks, eradicating corruption as he went. Frank Serpico didn’t need a Batmobile to do what he did…

Of course, some say Bruce Wayne died that night with his parents, and only Batman remains. Who is to say he’s more sane than Rorschach, really?

But Rorschach is poor. He’s ugly. He lacks a good education.  For him to make a difference, he has to go extreme, and I can get behind that in my own black-and-white moral way.    Maybe the average man has to fight crime by being a sledgehammer and a trenchcoat. There’s something pretty admirable about a pull-yourself-up-by-the-bootstraps costumed crimefighter over the flashy “I can have everything and women too!” persona of Batman.

Ultimately – and this is probably shocking, and totally at odds with my tree-hugging, liberal, don’t-eat-anything-with-a-face, let’s live in socialist harmony personality – I dig Rorschach for a simple and brutal reason: He kills.

Batman doesn’t.  And while that seems quite noble, it’s impractical when you’re dealing with the rogue’s gallery he fights.   Because he never, ever is willing to kill the Joker, hundreds (perhaps thousands) of lives have been ended or ruined as a result of his One Rule.   Sometimes, you have to make the hard call, and pull the trigger. Cops know this. Soldiers know this.  Gunslingers and presidents knows this. Rorschach, with his meat cleaver and hacksaw, figured this out on his second or third night on the job. Batman puts his nose in the air, and pretends he’s serving the greater good by putting Joker in Arkham. Again.  So he can break loose, and paralyze Barbara Gordon because hey, Batman’s not going to kill him or anything, right?

It’s a gray area, I’ll grant you. It’s the sort of uncomfortable truth that lurks over vigilantism.  If it’s my kid that’s been kidnapped and raped, then I want Rorschach to find the killer and dispense justice.  If I’m the street thug, I want a fair trial, damn it!

And really, who does he kill that we’d miss? A child molester? Some really awful prisoners?  Eh.   I’m not going to waste too much time crying over them. Just like I wouldn’t over the Joker, the Scarecrow, or Two-Face if Batman finally decided to man up and strangle them in a dark alley.

Don’t get me wrong. I wouldn’t want to sit next to Rorschach on a bus. But if I’m living in the derelict brownstones of alternate New York, I’d like to know he was out there.  Especially in a world without Wolverine.  Now there’s a superhero…