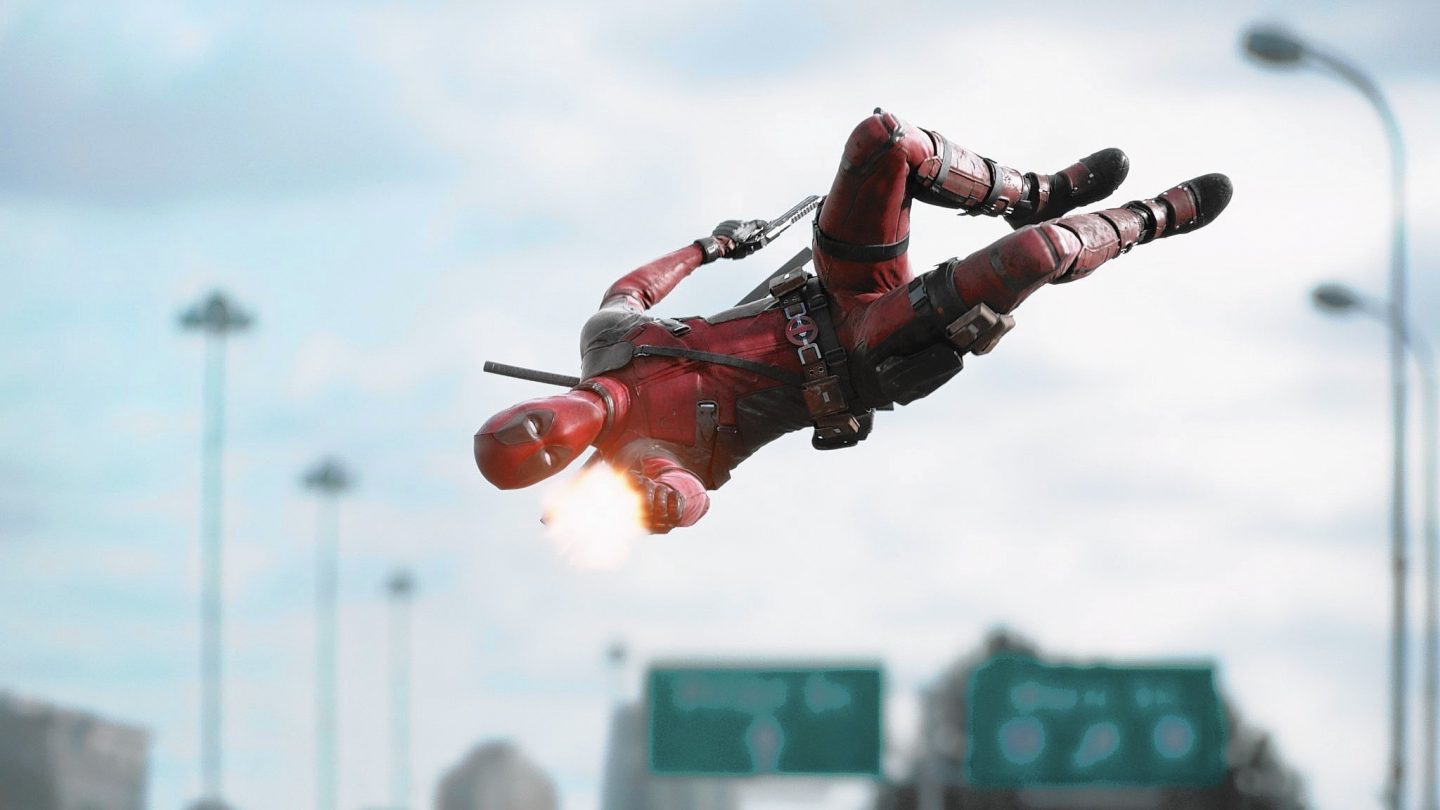 Deadpool is a criminally deranged, psychopathic ninja mercenary with a mutant healing factor, a withering sarcastic wit, an encyclopedic array of pop culture references, and unfettered access to katanas, hand grenades and automatic weapons, which he uses to kill everyone ever.  He’s like Snake Eyes, Wolverine, and David Spade’s Hollywood Minute mashed into the body of an Olympic athlete, then combined with the impulse control of Charlie Manson – and the end result is that he’s so fucking awesome at pummeling people into meat juice that he somehow manages to be an effective assassin even though he sneaks around heavily-fortified military facilities in a fire-engine red jumpsuit.

Deadpool’s real name is Wade Wilson, though I prefer to avoid calling him that because it just makes me think of the middling NFL Quarterback who today is pretty much best known for being so completely fucking terrible that when he blew his knee out while playing for the Saints the hometown crowd actually cheered the fact that he’d gone down with an injury (this, of course, was back before Katrina, when it was still OK to say that Saints fans are assholes).  Perhaps this association is somewhat appropriate, however, because if there’s one thing our favorite comic book mercenary is known for, it’s taking a severe beating in as entertaining a way as possible.  Of course, unlike Wade Wilson’s NFL career, Deadpool generally rebounds from his crippling injuries by bouncing right back in the next issue decapitating feebs with a samurai sword while talking shit about Bea Arthur and headbutting bullets through his enemies’ brains.

The Merc with the Mouth’s origin story is one of the more convoluted things you’ll come across, but the gist of it is that Wade Wilson’s parents were killed by some combination of cancer and/or bullets while he was young, and the man who would become Deadpool responded to this tragedy by dedicating his life to becoming completely fucking awesome.  He joined the U.S. Special Forces, but when being a Green Beret wasn’t dangerous enough for him, he decided to go mercenary instead, offering his flying/stabbing/murdering skills to the highest bidder.  He traveled the world planting katanas in peoples’ faces in exchange for money, leaving behind a trail of bloody corpses and vengeance-seeking arch-nemeses in his wake, but when you’re an insane ninja master who dual-wields Uzis you usually don’t have to waste all your time worrying about the myriad people out there who want to run your head through a garbage disposal.

But the face-stabbing murder party couldn’t last forever, and Wilson eventually learned that he was getting his ass kicked by the one thing on this planet capable of defeating him – he was suffering from an advanced stage of some kind of horrible unsurvivable cancer.  So, confronted with his own mortality, Wilson took the obvious next step and dumped his girlfriend, volunteered for the Weapon X program (why not?  It did so much great stuff for Wolverine…), and let a bunch of crazy whacked-out Canadian scientists perform a near-endless series of sadistic experiments on him in an effort to “help him out brah”.   The evil scientists (is there any other kind?) implanted him with Wolverine’s awesome mutant healing factor, which did a great job of slowing down the cancer, but unfortunately ended up setting processes in motion that would eventually cost Deadpool his livelihood, his good looks, and whatever remained of his already-tenuous grip on his sanity.  No biggie.

After Lance Armstronging his way free of cancer, Wilson worked as a special operative on behalf of Project X, and things were going pretty well until he (possibly not accidentally) killed a teammate during a mission.  Since friendly fire is generally frowned upon by military types, Wilson was rejected from the Weapon X program and thrown into some kind of fucked-up evil Canadian prison where he was subjected to a bunch of ridiculous experiments that drove him batshit insane and left his face looking like a combination between the Thing, Red Skull, and a scrotum.  While in the facility he fell in love with the physical personification of Death, which was fun until Thanos got pissed and severed their connection – this was good for Thanos, sure, but the downside was that Wilson was pretty much immortal from that point on.  A good example of this newfound resistance to death is his escape from the afore-mentioned hellacious facility – when some nutjob pulled out Wilson’s still-beating heart, Wilson got super-fucking-pissed, regenerated a new heart and immediately avenged his own death before killing a bunch of guards and walking out of the facility amid a pile of exploded corpses.  Nowadays he works as a professional badass-for-hire, wears a mask to hide his disfigurement, and calls himself Deadpool because that’s the title of an awesome Dirty Harry movie.  Ok, maybe I made that last part up.

One cool thing about Deadpool is that aside from the healing factor he doesn’t have any kind of genetically-enhanced powers – he’s just a regular dude who’s honed his strength and reflexes through decades of training in pretty much every fucking martial art this side of thumb-wrestling.  He’s a master marksman, a peerless swordfighter, and can efficiently dual wield any weapon larger than a staple remover with ultra-deadly results.  He also speaks fluent Japanese, German, Spanish and English, can order a chimichanga in seven different languages, and uses a teleportation device to blink in and out of the most secure military installations, making him basically the ultimate assassin.  Of course, that mutant healing factor doesn’t hurt either – it’s bailed him out every single time he’s died horrifically in battle, which, incidentally, is basically every 2-3 times he shows up in a comic book.  During his career serving as essentially the Marvel Universe’s equivalent to Kenny McCormick, Deadpool has been blown up, liquefied, eaten, barfed out, torn in half, sniped, shot with everything from arrows to ninja stars, beheaded a couple times, disintegrated into ashes, and taken more flying knee strikes to the face than any one man probably deserves, yet no matter how horrific his injuries he just keeps on coming back looking for more asses that need to be wrecked.

As you can probably imagine, there’s a pretty big market out there for a professional assassin who has access to a teleportation device, a pair of gleaming steel katanas, and the ability to survive after being cut in half by machine gun fire, and as a result the Regenerating Degenerate shows up pretty much all the time.  It doesn’t matter what’s happening in the story arc – if some super-villain needs to whack and/or capture a hero (and this happens fairly often in the Marvel Universe), the next thing you know Deadpool is dropping down from the ceiling and pummeling the fuck out of Shatterstar, or hauling ass on a moped, or massacring an entire military base in Zaire and fist-fighting a dude inside the lion enclosure at the zoo.  He’s worked for the Kingpin, taken a job as a Hobgoblin impersonator, pissed off X-Factor, served as a sumo-wrestling Yakuza enforcer, and spent some quality time hanging out with a dude named Dr. Bong, which probably sounds a lot more chill than it really was.  Deadpool eventually got sick of taking bullshit orders from bizarre time-traveling intergalactic law firms / arms dealers, and now he owns his own mercenary firm, where one of his employees is his own disembodied flying zombiefied head from another plane of reality.  He’s just entrepreneurial like that.

Another bitchin’ thing about The Crimson Nutcase is that even though he’s a totally merciless bastard, he occasionally shows signs of having some vague remnants of a conscience.  Essentially what it amounts to is that he’s a villain who wants to be a hero but knows he doesn’t have what it takes – mostly because he really has a tough time not killing people everywhere he goes.  His affiliations with teams like Alpha Flight and the X-Men never really seem to last long, because at the first sign of trouble this guy is running through a knee-deep river of blood screaming “BULLLEETTTTSSS!” while firing twin submachine guns indiscriminately into a crowd of enemies.  Superheroes usually frown on this sort of thing.  They also didn’t find it all that funny when Deadpool fought alongside the X-Men while wearing an exact replica of Marvel Girl’s costume (complete with miniskirt), though they were probably the only ones who felt that way on that particular occasion.

Still, despite being a total motherfucker, Deadpool does occasionally come through for the forces of good.  He’s fought the Skrulls, thwarted an alien invasion, saved his shape-shifting ex-hooker girlfriend’s life by passing some of his healing factor on to her, and once saved the free will of humanity by kicking Captain America in the ballsack.  Which was awesome, by the way.

Deadpool is also pretty fucking hilarious, mostly because he’s one of the few comic book characters out there who doesn’t take himself too seriously.  He talks endless shit to his enemies, always has some kind of snarky comment no matter how serious the situation may seem, doesn’t hesitate to taunt his enemies even when they have the upper hand, and doesn’t have a problem breaking the fourth wall and cracking jokes directly to the readers – a trait that doesn’t do anything to dissuade his allies from their belief that he’s completely fucking insane.  He also answers a letters column.  Oh, and his cell phone ringtone is the YMCA theme – the guy is apparently already so badass he just doesn’t give a shit about keeping up appearances.