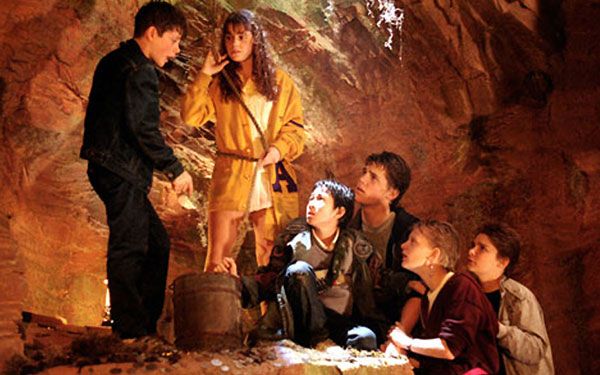 The real trouble with this kind of broke is that it’s mostly voluntary.  That is to say, I’ve been afforded ample opportunity in my lifetime to achieve material success, and I have essentially ignored said opportunity and will more than likely continue to do so.

Why, you may ask?  Why cling to this plebian lifestyle of mine?  Why work not one, but two jobs well below my level of education?

Yes, Richard Donner’s 1985 film about a rag-tag bunch of adolescents searching for pirate treasure on the Oregon coast in order to save their soon-to-be foreclosed homes is not only a cult classic, it is also the most inspirational and motivational movie with which I grew up, far moreso than even Pee-wee’s Big Adventure or the original Star Wars trilogy.  True, like these films, The Goonies holds major nostalgic significance for me.  Even today when I watch it, I can almost smell the shag carpet in my childhood living room and I still get that twinge to go into my backyard and dig until I hit paydirt.  This is not to say that those other movies don’t hold more significance than when they were released when I was a boy.  It’s just that The Goonies, more than any other film, still speaks to me as an adult, and the lessons it imparts only become more important as time goes on.

And the most important lesson, the one I find most relevant: only sell-outs sell out.

The wishing well scene comes at about the halfway point in the movie.  Our heroes up until now have not so much been searching for One-Eyed Willie’s treasure as they have been an escape from the Fratellis, the murderous band of fugitives whose hide-out the Goonies have accidentally compromised.  But for a moment, once they passed the underground waterfall (a sort of curtain to this next Campbellian step on their journey), it looked as though they’d found both the treasure and escape.

But appearances are not what they seem, even deep underground.  Firstly, the plethora of coins in this cavern is not One-Eyed Willie’s rich stuff.  Yes, these six youths could have easily filled their pockets with this money and called it a day.  But their houses would still be foreclosed on in the morning.  The wishing well “treasure” is a short-money prospect.  If the Goonies want to save their homes, they’re going to have to do more than wish for it to happen.

And then Troy comes along.

Troy Perkins, more than his father, more than the Fratellis, is the true antagonist in this film.  Portrayed by Steven Antin (who would go on to do a great semi-irregular turn as Detective Savino on NYPD Blue), Troy is the ultimate spoiled rich kid, with his cherry-red convertible and goofy country club visor.  In so many words, Troy has taken full advantage of all the opportunities afforded him by his station in life.  And now he is as literally above the Goonies as he is symbolically: at the lip of the well above ground with a rope and a bucket.  Troy has what the Goonies need to re-enter the normal world.

But Mikey, as Troy’s antithesis, sees this “opportunity” for what it really is: a chance to be back under the yoke of the “real” world, of the accepted social structure.  If they ride up Troy’s bucket, they can be dry and out of immediate harm’s way.  But Troy’s father is still going to tear down all of their homes the next day to build a golf course (that sprawling symbol of the upper class’ raging excess).  So what kind of opportunity is this, really?

Mikey isn’t only able to see the long view of life under the mandate of the Troys of the world; he’s also visionary enough to give himself credit where it’s due.  He opens his Troy’s Bucket monologue with Chester Copperpot, the supposed “expert” who had gone to search for the treasure fifty years hence and who’d only find a giant boulder crushing his mid-section.  Copperpot may have been acknowledged as an expert, but even he hadn’t been able to make it as far as these children.  So who’s the expert around here anyway?

Mikey’s opposite in this scene, the one to whom he’s directing the bulk of this speech, is Andy.  Andy is the most scared, the most hysterical about the whole situation and, as she reminds Mikey, she’s not even a Goonie.  This is hard to debate.  She’s a pretty little cheerleader, and so she fits in more with Troy and his crowd, unlike the rest of the Goonies, which include a hyperactive asthmatic, a sweaty jock, a thickly-accented Chinese kid, a bilingual wiseass who’s into black music (i.e., Prince, Motown), a near-sighted new-waver, and a fat Jewish kid.  All representative of the Other, all far from the whitebread country club world of Astoria, beneath Troy in every respect.

Yet if Andy is so normal, then why doesn’t she let Troy look down her blouse?  Why does she elbow his lip and defend Brand against Troy’s macho bullshit?  She may be the least likely Goonie, but she’s already exhibited a tendency to break from the norm.  All she needs now is to be convinced that the norm is more of a danger to her than a family of criminals and a lot of centuries-old booby-traps.

But really, this crisis is not what fuels Mikey’s speech.  In what is probably one of the more quotable lines of the film, Mikey sums up his argument by pointing out the distinction between the Goonies themselves and their parents:

“Our parents, they want the bestest stuff for us.  But right now, they gotta do what’s best for them.  Because it’s their time, their time up there.  Down here, it’s our time.  It’s our time down here.  That’s all over the second we ride up Troy’s bucket.”

The reading of little Sean Astin here can often strike one as being a bit overdramatic.  But I think it’s more like the sentiment here cannot be overstressed.

It seems there has always been a distinction between childhood and adulthood, so that it’s almost natural for people in our society to consciously say to themselves, “Right, here’s where I’m a grown-up now.  No more crazy Goonie adventures for me, please.”  And it was a good portion of the baby-boomer generation, guys like Donner and screenwriter Chris Columbus and producer Steven Spielberg, not to mention other peers of theirs like Joe Dante and Robert Zemeckis, who began to do away with that, who were unrelenting when it came to giving up on their age of innocence.

I’m sure it was all very cathartic for them and all, but the impact these words had on goofball kids like me, who was only eight years old when this movie came out, is almost too deep to describe.  And even though the boomers largely sold out as they grew older, even this fact could not lessen the impact of the art created by their generation.

My parents did want the bestest stuff for me, but they did what was right for them.  They encouraged me (to put it kindly) to not be a major league fuck-up.  And though my rebelling against that could certainly be characterized as mere teenaged pigheadedness, the fact that I’m now well into my 30s and still pretty much the same dude I was in 1993 tells a different tale.

Like Andy, I heeded the words of Mikey Walsh and remained down here, where it is my time.  And yes, I’ve had to slog through some pretty gross and dangerous environments in my life, places and situations I could have easily avoided by maintaining the upper-middle-class fast track that was my birthright as a straight white American male, and college-educated no less.

But my house would have been torn down.  The home I had created for myself in punk rock records and comic books would have been demolished to make way for the country club of 2.5 kids and 2.5 cars in a split-level garage.  The safe bet, the short money.  Or I can continue on as I have been: dedicated to my chosen craft of writing, slipping past the booby traps of this low-rent lifestyle of mine in order to hold fast to myself, my true identity.  And maybe—just maybe—I’ll finally hit that waterslide and find myself in the lagoon with The Inferno and One-Eyed Willie’s rich stuff.  Frankly, even if I don’t, I’ll still have more fun than I would otherwise.

So yes, I could ride up Troy’s bucket.  I could quit my crappy day jobs and go into a career more suited to a typical adult.  But as broke as I am, I’ll tell you something, Walsh.

You’re looking at the richest people in Astoria.