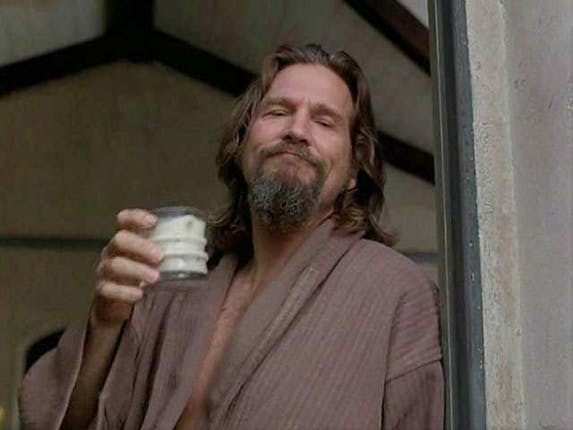 The Big Lebowski enjoys what is probably the largest cult following of all the cult-attracting films of Joel and Ethan Coen, and has pretty much since its release over a decade ago.  And “cult” has become more apropos a term since the advent of Dudeism, the official unofficial philosophy of Jeffrey “the Dude” Lebowski (dudeism.com). Dudeism teaches that we all need to just take it easy, man, and on a personal note, if there is one thing I’ve figured out about myself in the past few years, it’s that I am not perfectly calm here.  But I am learning to abide by adhering to a pretty strict Dude regimen.  Here’s some of the stuff I’ve figured out.

It all starts with the rug.  When we meet the Dude, he merely wants some milk for his White Russian, but a case of mistaken identity leads to an Asian-American urinating on his rug, which as he so often laments “really tied the room together.”  Comedically speaking, for a man to embark on such a perilous journey all for the sake of a soiled rug is a golden premise.  But think about it: why would the laziest man in Los Angeles County go to all this trouble just for the sake of a rug that could easily be dry-cleaned?  The answer: Unity.

To restore that unity, Dude seeks the counsel and aid of his bowling team, a dynamic trinity of interests. The bowling league to which Walter Sobchak, Donny Kerabatsos, and Jeffrey Lebowski belong consists of three-man teams, one of those men being primarily an alternate.  This system is a deviation from your standard four-person team kind of a league, and therefore, within the text of the film, we can assume this is important.  Especially for our purposes here, since every good religion needs a holy trinity.

Walter runs a security outfit.  He has been trained and experienced in combat—hand-to-hand in canopy jungle, no less.  Walter plays by the rules.  He is Order, with a capital “O.”  As such, Walter doesn’t always see the world as it is, but as how it should be.  A friend of mine recently pointed out that Walter is right about everything he puts forth: Smokey was over the line, Bunny was never kidnapped, that’s not Bunny’s toe the big Lebowski received in the mail, etc.  He isn’t strictly always right, since Walter seems to be fairly incorrect in judging that the big Lebowski is not, in fact, disabled.  But it does point up that Walter does not question his surroundings, but instead demands that they take the shape he sees fit.  This is not Vietnam; there are rules here.

Donny was a man who loved the outdoors.  As a surfer who explored the beaches of southern California, Donny had an enquiring mind, a mind whose search for knowledge was never sated.  He is Disorder.  Not in a destructive way, but in that pure, child-like manner of constantly questioning his surroundings.  He acts as a natural counter to Walter, leading Walter to angrily silence him at every possible opportunity.  Donny was not stupid, but he was inquisitive; not naïve, but innocent.  And it is no accident that, at the end of the film, the Stranger links Donny’s death to the Dude’s forthcoming love-child with Maude: the natural disorder of the young will be perpetuated even as Donny rests in the bosom of the Pacific Ocean.

The Dude, as the team’s alternate, acts as the bridge between these two meta-concepts.  The Dude, of course, represents the most important concept in Dudeism: Unity.  Not only is he never fazed by Donny’s ceaseless questions, he also tempers Walter’s aggressiveness.  The Dude is also a private detective, whether he really wants to be or not (and being in the running for laziest man world-wide, you can be assured he does not).  As a private detective, the Dude seeks to take all the pieces of the puzzle—the ins, the outs, the what-have-you—and bring them together to form a final picture.  Walter and Donny need the Dude in order to co-exist, and we all need the Dude in order to unite the two, and thus take it easy.

Before Wu pees on the Dude’s rug, all is right with the world: Vons accepts the check, the toilet seat’s up, the room is tied together.  Jackie Treehorn’s thugs have in effect disintegrated the Dude’s world, and although Walter (as well as Monty the landlord) is certainly helpful in convincing the Dude to pursue compensation, there is simply no way the Dude would go to all this trouble for anything less than an overall feeling of Unity—a feeling of Dudeness, as it were.  Without the rug, things get very un-Dude.

There are also many mentions of genitalia, often without a single batting of an eye.  Smokey feels it necessary to report Walter’s threat on his life, although Smokey himself does not “want to be a hard-on about this.”  The chief of police of Malibu hammers on the epithet “jerk-off” several times while chastising the Dude.  And of course, we all know how the Jesus ended up doing time in Chino.

But the real problem for the Dude as concerns all of this comes near the end of the second act when the Germans break into his private residence and threaten to cut off his johnson.  We’ve already seen that they care about nothing, including the removal of female toes.  It is at this point that the Dude begins to question the veracity of his quest: “I could be sitting here with just pee stains on my rug.”  Aside from the obvious pain and discomfort any man would suffer in having his johnson cut off, this particular rending asunder is directly linked with the disunity already inflicted upon the Dude’s rug.  And so again, we come back to Unity.

But what do you need your johnson for, Dude?  As mentioned already, by the film’s end, we know that the Dude is soon to become a father, although Maude Lebowski makes it clear that she wants him to have no part in the raising of the child (if you’ll forgive a sentimental aside, I don’t believe for a moment that Maude and the Dude don’t end up living together happily ever after).  So naturally, the Dude needs his johnson not only to maintain Unity, but to further create it.

The moment Maude officially meets the Dude in her studio loft (we can effectively discount Maude’s retrieval of her rug and the crack on the Dude’s jaw as their first meeting), she begins testing him right away, seeing if he will flinch at the female form or the word “vagina.”  She even goes so far as to have him examined medically to confirm his fitness for procreation.  It is in just these (not-so-)subtle ways that Maude determines that the Dude is more than adequate to help her conceive—in a very literal way, Maude and the Dude complete each other.

Maude’s art has been commended as being strongly vaginal (as is, not coincidentally, the pattern of her rug).  The Dude himself is brimming with virility; his very nickname is a synonym for “man.”  And as is the natural order of things, man and woman come together, not just for fun and games, but to unite in that natural, zesty enterprise in order to create life.  This is how the whole human comedy keeps perpetuating itself down through the ages, this form of Unity.

TAKE ANY RUG IN THE HOUSE—Acting through the Dude

So how does he do it?  How does the Dude handle playing one side against the other, in bed with everybody?  It’s not easy, but it is actually not as difficult as it looks.  Once the Dude realizes in his meeting with the big Lebowski that his micturated-upon rug will go unreplaced, he says, “Fuck it.”  To which the big Lebowski retorts, “That’s your answer to everything!”  Later, after Walter threatens Smokey with a word of pain, the Dude tells Walter to just take it easy.  Walter’s reply: “That’s your answer for everything, Dude.”

These are in fact the same answer, and they are in fact the answer for everything.  “Fuck it” may be a little more harshly worded, but the basic philosophy behind it is still to just take it easy.  Otherwise, things get far too complicated.  The big Lebowski, with his bottomless vanity, gets himself so heavily into debt that he resorts to embezzlement from a children’s charity.  He is not taking it easy.  Uli and his fellow Germans, if they were true nihilists, would not go to all the trouble of lopping off a girlfriend’s toe even for a million dollars; they would have just said, “Fuck it.”

The main reason this attitude can be so difficult to maintain, in my experience, is just a matter of practice.  So many of us become so uptight in our thinking that there seems to be no way around it.  But really, one needs simply to persevere.  The Dude, even when faced by threats of castration and the destruction of his car, persists in his Zen-like attitude and ultimately sees things work out in the end.  At least twice while arguing with the Dude, Walter acquiesces to this: “Have it your way, Dude.”  And the Stranger himself even concedes this point in this exact manner when the Dude continues to use so many cuss words.  If you stick to your guns, if you commit yourself to the facets of Dudeism, then this will be so.  You will have it your way.

I have a typically Western attitude towards Eastern philosophy, in that the most exposure to it I get is in fortune cookies.  So it comes as no surprise to me that Dudeism has sprung up around a lot of the basics in Taoism and Buddhism, and even Transcendentalism.  Happily, for slobs like me, Dudeism is helping to spread this wisdom nicely ensconced in booze, bowling, and a lot of swear words.  But whatever the method, as long as one strives for unity within one’s life, while at the same time taking it easy, it seems pretty clear that one will always achieve.

Go forth and abide.

The author would like to thank Matthew C. Funk for his valuable assistance with this piece.