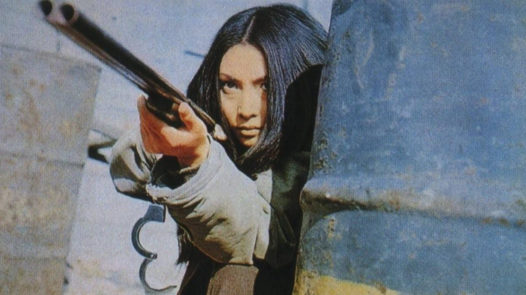 We left off last column with a run-down on the first of actress/singer Meiko Kaji’s Female Prisoner Scorpion series and a hint that things were about to get pretty weird. Well, the phantasmagoria goes full bore in the second film in the series, Female Prisoner Scorpion: Jailhouse 41 (Joshuu Sasori – Dai 41 Zakkyobo). Filmed, like its predecessor, in 1972, here Nami Matsushima, aka Sasori (scorpion), is pretty much fully transformed into something supernatural and, like Lee Marvin’s Walker/Parker in Point Blank, begins to haunt the minds of all who’ve wronged her. She even transcends time and space through some stunningly psychedelic timeshifts and edits. At one point, as Sasori hacks away at her foe, she literally slashes through the “screen”, taking us to a different environment.  It’s completely, beautifully bonkers.

In what would become a trademark of the series, the opening credits of Jailhouse 41 are a highlight. Kaji reprises theme song Urami Bushi (‘Song of Hate’/’Grudge Song’), as she does in the two subsequent films, and returning director Shunya Ito treats us to a prime example of the ‘Meiko stare’ as, returned to prison at the conclusion of the first film, Sasori rots away in a damp dark cell. Hands chained behind her back, she remains unbowed. She grips a metal spoon between her jaws and as the blood red kanji of the credits flashes on screen, through time-lapse she sharpens the spoon into a shiv.

The plot of Jailhouse 41 focuses on Sasori’s second escape from the big house along with a group of bad, bad broads. Together they battle infighting, shifting landscapes and desolate ghost villages as well as vile rapist salarymen and the ubiquitous figure of The Man. It’s a relentlessly experimental movie with, for example, some effectively jolting freeze-framing and, notably, the expository backstory of the other escapees handled, in song,  by a either a ghost, a witch or a ghost-witch  (you take your pick). Each of the other prisoners has a beef with the male of the species, in many cases entirely justified. Make no mistake, boys, we are the enemy here, portrayed as nothing more than leering, raping baboons in uniform. If the first Sasori film was a primer on what can happen if you break a woman’s heart and betray her, Jailhouse 41 totally forgoes all subtlety in painting the female as quite easily the more deadly of the species:

Again, it must be stressed that these are Japanese genre films over thirty years old. Put any American exploitation film of the period up against Sasori. Any of ‘em.  Even the mighty Pam Grier was never so tough and empowered and she was from a country with a strong women’s liberation movement.  Kaji herself was even so demanding, opinionated and forceful that her very acceptance of the role itself was dependant on the removal of the “obscenities” her character spoke (originally kept from the manga source material by Toru Shinohara). As she tells Chris D. in his book Outlaw Masters of Japanese Film.

“I told him (Ito) that was unacceptable, that it would end up making the film seem cheap and sleazy and that taking them out was one of my conditions for accepting the role…we decided we could convey what Scorpion was thinking, what she was going to do next, by the performance, by the visual instead of the verbal.” 1

Although seeming like a nice girl-gang movie, any ideas of Girl Power-solidarity in this life are put to rest near the film’s end. Finding herself alienated from the group, Sasori is used as bait to distract swarming police. As we know by now, however, Sasori is nothing but a creature of pure, dark motive and she gets her own back in a moment of utterly ice-cold vengeance before her attention is, once again, turned back to The Man.

Female Prisoner Scorpion: Beast Stable (Joshuu Sasori – Kemono Beya) came the following year, 1973. Opening with Sasori on the run, the film immediately displays the extent of Ito’s imagination.  This would be the last in the series with Ito at the helm, a tragedy really, as we shall soon see.  We open here with a subway tunnel. We follow its dark curves, but super-imposed over the top, mirrored images of Sasori’s wanted poster spool out. The implication is obvious – she is very wanted and very dangerous. We cut to the interior of the train, there sits our lady, here comes The Man. She immediately starts slashing at two cops with her knife but, alighting at the nearest station, she is unable to stop one of them from slapping on handcuffs. As the doors close, she has but one option and she takes it – cutting the cop’s arm off at the elbow. Cue Urami Bushi once again as Sasori runs through the crowded streets, a bloody hacked-off arm dangling from the handcuff at her wrist.

It is many fans’ favourite of the series, as it is mine. Easily both the soapiest and the most bizarre of the series, Beast Stable sees Sasori on the lam once more, and attempting to stay there – an impossible task for one so infamous. Befriending a prostitute named Yuki (Yayoi Watanabe) who keeps her brain-addled brother locked up in a shack where she services all his, uh, needs to prevent him from getting into strife outside, Sasori ends up tangled up in Yuki’s dramas as well as fending off local gangsters connected to an old prison rival named Katsu, and dealing with the relentless one-armed Detective Kondo (Mikio Narita) who hunts for her like a man possessed.

Katsu (Reisen Lee), the closest thing we get to a serious female nemesis throughout the entire series, resembles a bizarre pre-op Ming The Merciless, grotesquely sheathed in high-collared spangly dresses, hideously made up with terrible drag-queen false eyelashes, possessing a prominent overbite, she is the anti-Sasori. It’s a fashion war as well as a grudge match between the two here. Throughout the series, Sasori with her all-black outfit, complete with her floppy wide-brimmed hat, is sexy and chic – the ‘70s catwalk supermodel as hate-driven avenger. Katsu, garish and ugly, cruel without reason, is her true opposite. Completing the super-villain motif, Katsu maintains a cage filled with cruel crows, into which a drugged, beaten Sasori is thrown. For a time.

After her escape, arterial spray coats the white walls of an abortionist’s office and gangsters are stabbed in movie theatres, car washes, in alleyways covered in Sasori wanted posters. Again – this reinforces her near supernatural omnipresence. Her Walker/Parker-esque ability to haunt all.

This unfortunate man (director of 1966’s famed Black Tight Killers and, um, kind of ironically, a trilogy of rape-themed movies) stepped in to replace Ito. Despite being presented by Toei “with confidence” according to the trailer, Grudge Song, outside of yet another wonderful opening sequence (this time featuring some incredibly funky split-screening) is comparatively pedestrian.  Outside of a few pieces of outright Ito-mimicry, Grudge Song views a little like Point Blank made by Richard Lester instead of John Boorman – very capable, but lacking that certain flair. Gone are most of the elaborate, installation art set pieces and weird angles; in comes a notably bad outdoor, daytime chase sequence (it should be noted, however, that Ito stepped aside due to budgetary constraints and, considering this, Hasebe is to be commended for his work).  Also notable here is the difference in the male characters – for the first time, the men are not cartoonish fools, drooling over female flesh. In Grudge Song, the males are harder and more vicious than at any time before.

Grudge Song is a real oddity in that, apart from the lack of Ito, it gives Sasori a romantic partner named Teruo, a quite unbelievable plot contrivance given all that’s gone on in the first three films. By having Sasori fall in love in the fourth film, much of her power, and thus her menace is undone as she returns to the arms of a man, no matter how noble and badass he may appear (Teruo was tortured by police. His beef with The Man is T-Bone-sized).  Their love scene is suitably psychedelic and unsettling, however, and in the end, Teruo proves himself to be just as untrustworthy as everyone else. Broken-hearted and betrayed once more by film’s end, Sasori is again at her deadliest. Yep, it’s the ol’ noir series character trick of giving your protagonist something only to take it away, reinforcing the status quo even more sternly as a result.

For all its flaws, Grudge Song does feature some very clever use of interior monologue as Sasori and Teruo, each thinking their own separate thoughts, appear to have a purely telepathic conversation rather than individual ruminations over their respective fates, and it does feature the funkiest soundtrack of the series (it was this version of Urami Bushi that charted and sold over a million). In any event, it’s kind of a sad way for Kaji to bow out of this must-see series.

Hypnotising in their filmic techniques, so colourful they could be described as gaudy, at their worst the Female Prisoner Scorpion movies are merely bizarre revenge tales. At their best, and this is the norm, not the exception, they are hallucinatory, violent masterpieces – the comparisons with Boorman’s Point Blank are just. It’s also quite staggering to witness this independent  female angel of vengeance kick so much ass – as late as 2006, most of the Japanese girls I met would gladly abandon their own career paths just to get married and be little more than housewives.

With their clownish, lecherous males constantly emasculated and slaughtered by Sasori, it’s no stretch to say that, although packed with T&A, the Female Prisoner Scorpion films are surprisingly feminist – you simply do not mess with Sasori. There are other examples, of course, of strong women in Japanese crime films. The work of actresses Reiko Ike and Miki Sugumoto will be spotlighted frequently in this space, but even Miki and Reiko, as tough as they were, are constantly subjected to rape and torture in their films. They also lack the elemental eeriness of Sasori as well as the iconic silence, lingering close-ups on nipples and buttocks negate much of their subversive, fuck-you-man attitude.  Further to that, Reiko and Miki frequently played characters that were, to a certain extent, masculinised.  They speak in deep husky tones, go through long yakuza-tough guy honorific-filled introductions before they fight each other and rally their gangs with macho motivational speeches.

According to critic Fumiko Imaizumi, for many Japanese women, “their deepest desire is to be neither male nor female –in short, they wish to be sexless…This is not because of some biological taboo, but…because they realize that becoming an adult woman means playing a subservient role in life.” 2

Whatever your take on that (I personally disagree with much of it), it’s interesting to contrast this with Sasori – who even in her silence remains perfectly feminised, the complete opposite of these gruff-voiced, swaggering tough girl gang chicks of the same period. She is very much a broken-hearted woman gone elemental and demonic through her trauma and desire for personal vengeance and, as the series continues, to violently crush injustice.

In such a staunch patriarchy as Japan (and we’re talking now, not thirty years ago when these four Sasori films were made), it’s a surprise that the films went as far as they did. Given the popularity of Sasori at the time, not to mention their million-unit-shifting theme song, it’s a true disappointment that the fiery stare and wilfulness of Meiko Kaji did not inspire more young Japanese women to examine themselves and discover their own potential for independence.

Whatever, the series remains truly must-see stuff for fans of not only crime and exploitation film, but art-film fans and those who just generally dig cool shit. If you are reading this, you’re in that amorphous group somewhere, so hop to it, you won’t regret it.