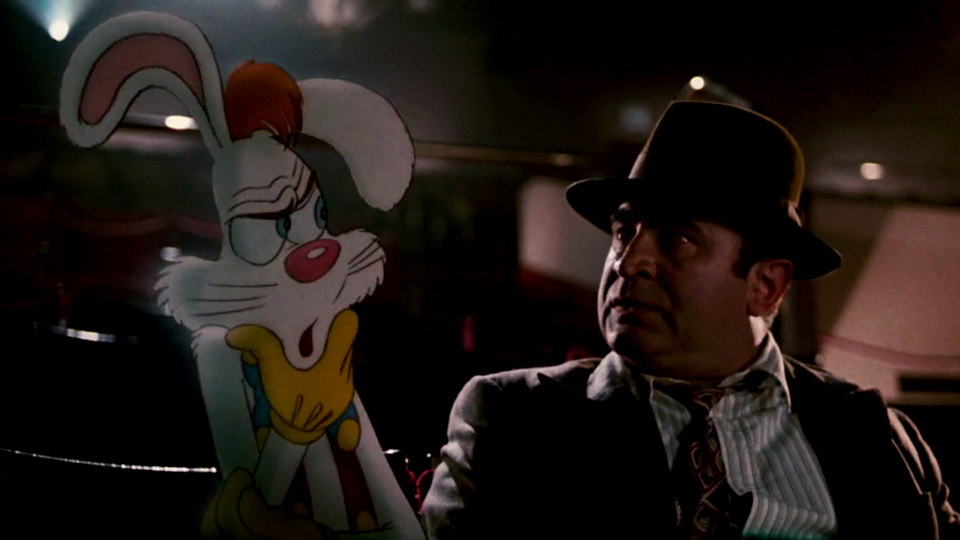 My friend’s dad took us to see Willow one sunny summer’s day in 1988.  It was a good movie and all, but honestly I was extremely distracted throughout the whole thing.  All I could think about was one of the coming attractions I’d seen for a film called Who Framed Roger Rabbit.  I’d seen Bedknobs and Broomsticks and other fare where cartoons were mixed with live action.  But this flick looked much different—it had sex and violence and swear words.  Mix those with cartoons, and it was everything my almost adolescent heart could desire.

Thing was I was gonna have to wait until the next summer.  Sharp-eyed kid that I was, though, I’d seen in the trailer credits that the flick was based on a book called Who Censored Roger Rabbit? by a guy name of Gary K. Wolf.  The next weekend, I rode my bike down to the local library and checked it out.  The futsy librarian seemed a bit weirded out that a little kid like me wanted to read something that looked if not a little unsavory, then at the very least over my head.

She wasn’t wrong on either count.  I remember scratching my head quite a bit at some of the overt cultural references in Wolf’s book, never mind all the subtext that whipped over my head like just about everything else back then (I was very short, even for my age).  Come to think, I’m not sure I ever finished it back then, but I did recently treat myself to a copy and revisited it.

Had the famous movie never been adapted from it, Wolf’s book would likely still enjoy a cult following.  After the first thirty or forty years of straight-ahead P.I. fiction, writers were beginning to suss out different angles for the hoary old stories of booze, broads, and bullets.  This is extremely prevalent today in the superlative works of guys like Jonathan Lethem and Nathan Larson, but in 1981, Wolf was very much at the forefront of this era of the genre, which probably explains why it took him so long to sell it—apparently, many potential publishers thought the setting and subsequent subject matter was just too out there for an audience to find it.  Given the metric tons of money the book eventually spawned in one form or another, if those fools haven’t hurled themselves out of their office-suite windows by now, they’ve got more resolve than I’ll ever have.

Who Censored Roger Rabbit? stars private detective Eddie Valiant who is hired by comic-strip actor Roger Rabbit, second-banana to Baby Herman.  The toons in Wolf’s book all work in the comics industry, either strips or books.  Roger is being held to a lousy contract by his bosses, the DeGreasy brothers, when they had promised him a solo strip of his own.  On top of that, Rocco DeGreasy has stolen (or stolen back, depending who you ask) Roger’s wife, Jessica, a hotsy-totsy humanoid toon everyone is gaga for.  Eddie is reluctant to take the case, as he doesn’t much care for working for toons (not many humans in this world care much for them), but he needs the money.

Of course, the more layers he peels off this onion of a job, the more interested he becomes beyond the profit margin.  What starts as a business fraud investigation veers sharply into a murder case, and then an old teakettle starts to acquire a very Maltese Falcon-esque importance to many of the principals.  True to form, Eddie Valiant sees the case through to the end, bitter as it is.

Wolf’s book, by its very nature, has its lighter sides.  The toons featured are mostly of his own creation, although bigger comic-strip names like Hagar the Horrible and Dick Tracy show up.  But like a lot of good comedies, there is a darker underbelly here.  Humans and toons alike are often greedy, violent, and manipulative.  To say the sex, violence, and language is excessive would be too harsh, but Wolf doesn’t shy away from anything either.  It’s not too racy for a ten-year-old kid, but you wouldn’t wanna read it aloud to one either.  The title itself is a good example of Wolf’s cleverness in this way—it can be taken literally, since Roger is a comic-strip character, but the word “censored” could also be read as an actual deleted expletive, so the title could just as easily be something like Who Fucked Over Roger Rabbit?

The world in which the book takes place is the modern era, but the attitudes humans hold toward the toons lend the book a civil rights-era feel.  Eddie himself is a fairly unapologetic speciesist, and there are off-hand mentions of toons breaking the animation-barrier in the sports and business world.  In Wolf’s book, there is a generally accepted attitude of “separate but equal,” which certainly lends a noir feel to the whole enterprise, if it never really comes to the forefront of the book.

However, for all the reason to read Who Censored Roger Rabbit?, there are some definite flaws in the novel.  For one thing, Eddie Valiant is an extremely flat character for a private-eye.  Not every private-eye needs a deep, tragic past in order to be interesting, but Eddie comes off as more of an idea of what a private-eye is, with no real depth at all.  While Wolf fairly successfully creates a hyper-realistic world for his characters, there is one detail which gets to be distracting.  Each time one of the toons speaks, his/her/its words actually physically manifest themselves in a word balloon over their heads, which will eventually dry out and crumble on the floor, and which will take the shape of the speaker’s mood—heavy and foreboding for depressing dialogue, soft and nearly invisible for whispers, and so on.  It’s a cute idea, but just becomes too unwieldy after a while—the reader can get bogged down in descriptions of the dialogue rather than getting caught up in the plot that the dialogue should be moving forward.

The most fatal flaw is the ending, which I won’t give away, but suffice it to say, it is about as actual a deus ex machina as you’re likely to find, and even the ancient Greeks only used that when painted into a corner.  Also, said god-machine hinges on Eddie Valiant being “pure of heart,” which I wasn’t buying, even given his namesake.  Kind of a let-down, but the book is still very much worth your time, even if just to see where and how exactly the film departed from it.

The most obvious change in the movie is making Roger Rabbit a short-feature cartoon character rather than the star of a comic-strip.  This makes complete sense given the obvious differences between a film and a novel.  If I had to guess, I’d say that Wolf chose the funnies because, though the novel is not illustrated, people are accustomed to reading comic-strips—the printed word is closer to the word balloon than it is to spoken dialogue.  At the same time, I think Wolf’s book might have benefited by exploring the more antic world of animation rather than the generally static medium of comic-strips.  Regardless, a movie about comic-strip characters clearly would not have worked as well.

There is more depth to the characters in the film as well, even if not tons of it.  Eddie Valiant is given a much more expansive backstory involving a love interest and a traumatic past.  Bob Hoskins turn in the best acting of his life, never going too maudlin with the potentially sappy material he was working with.  Jessica Rabbit is also given some redemption.  In the book she’s a femme fatale through and through, whereas in the film, she’s difficult to trust through to the third act, when it’s revealed her only real crime is being drawn that way.

The biggest change in Who Framed Roger Rabbit is the plot, which bears no resemblance at all to Wolf’s story, but very much resembles Roman Polanski’s 1974 classic Chinatown.  In that film, the antagonist sets up the hero to investigate a phony case in order to steal the lucrative water rights to Southern California, a story very much steeped in actual history.  In Who Framed Roger Rabbit, which now is set in the year 1947, the plot revolves around an underhanded land-grab of Toontown, which is to be mowed over to pave the new freeway system.  In Chinatown, the bad guys win, but you’re not going to find that in a Disney movie.  When I’m feeling particularly cynical, I wanna call bullshit on the ending of Who Framed Roger Rabbit.  But more often these days, I view the ending as a nice alternative universe, a world where humans and cartoons live in harmony.  And in that world, the bad guys don’t win.

Who Framed Roger Rabbit was a runaway success when it was released, and naturally Disney added the property to its stable of cash cows.  Subsequent short features with the character ran in front of Honey, I Shrunk the Kids and Dick Tracy and were extremely well done little cartoons, very much in the vein of the golden era of animated cartoons like the film was.  But since then, Roger Rabbit has become like a lot of Disney properties—grist for the T-shirt mill.  Not to say I don’t get a kick out of the Toontown section of Disneyland, but none of the depth or artistry of the film has managed to find its way into the franchise at this point.  But hey, that’s Disney for you.

Gary K. Wolf also has at least some creative control over the character still, but it seems like he’s just looking for a payday as well.  In 1991, he wrote Who P-P-P-Plugged Roger Rabbit? in a glaringly obvious attempt to capitalize on the characters’ popularity.  Far be it from me to stand between a writer and his next meal ticket, but from all accounts, this book completely eschews the original novel, writing those events off as just a dream.  Call me closed-minded, but I am not planning on giving this a read anytime soon, based off the title and retconning alone.  Wolf has also written a Roger Rabbit short story, which is available for free on his website.  But it seems for the most part, Wolf has chosen to focus on other projects than his most famous creation, and I’d say that’s probably for the best.

So from an odd little tribute to cartoons and film noir to a massively financially successful tribute to cartoons and film noir, the Roger Rabbit franchise remains strong in its roots, even if the more recent fruits are too light and airy for anyone but children to enjoy.  Fortunately, post-film versions of the characters have done little to reduce the quality of the source material, as the book still holds strong as a slanted view of the P.I. novel, and the movie holds up just as well today as it did back then, equal parts funny and beautifully executed.  The crime genre proves itself again to be fertile ground for all kinds of art, in all kinds of ways.