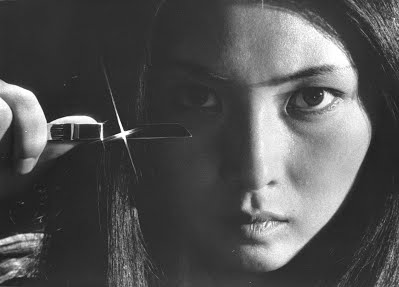 She sold over a million albums, her films inspired much of Kill Bill, and when she didn’t want to do what she was asked of by executives, she said uh-uh and split for greener pastures. Her name is Meiko Kaji. Possessed with a confidence and an intensity that saw her type-cast as one of Japan’s toughest bad girls, Meiko’s beauty and fierce you’re-a-fucking-dead-man stare, framed by tresses of long jet-black hair (frequently shot in weirdly-angled extreme close-up), has made her a global cult film icon.

Meiko was born in Tokyo in 1947. Her career began under the name she was actually born with—Masako Ota. Her first starring role for legendary film studio Nikkatsu, after several handfuls of small parts, was in the exquisitely-titled Mini-Skirt Lynchers (1969). Although she stayed incredibly busy, real success arrived with her name-change, “toughed up” at the request of director Masahiro Makino. Amongst other stand-out films early in her career, Meiko made four Stray Cat Rock girl-gang flicks (all made in 1970—we’ll come back to these in a later column).

Stay with me here, I have to digress…

Christ. Where were we?

Right, so after seventy Nikkatsu films in just seven years (according to Mark Schilling’s No Borders, No Limits: Nikkatsu Action Cinema), Meiko Kaji wanted nothing to do with this studio-shift in filmic sub-genre and headed off for Toei. Nikkatsu’s rival was most accommodating, and once at Toei, she played the two roles that eventually immortalised her to film geeks everywhere—Lady Snowblood and, the focus of this column and the next, Nami Matsushima—Female Prisoner Scorpion.

The first of four films that Meiko made as Sasori (scorpion) was Female Prisoner #701: Scorpion (Joshu 701-go Sasori), 1972. On the surface, it’s actually a little difficult to understand Meiko’s concerns about Nikkatsu’s move to roman porno. Scorpion opens with a cavalcade of naked Japanese female yardbirds put through a bizarre monkey-bar exercise routine by the pervy warden and his crew of prison officers who, as the film unfolds, seem to be somewhat retarded by their own lust for the bad-girl flesh surrounding them. It’s all so conventionally Women-in-Prison film for a bit, you might find yourself wondering when Pam Grier and Margaret Markov might stroll into the shower room, but then Sasori’s origin unfolds and the film takes off in bizarre and experimental ways.

There’s a wonderful theatricality to Japanese films of this period; sequences are often drenched in symbolic and psychedelic un-reality. The lighting is often lurid and colours saturated. Actors freeze-frame mid-scene whilst the action amongst the principals plays out.  In Female Prisoner #701: Scorpion, Sasori’s short origin sequence puts a lot of these techniques to good use, as well as ably demonstrating the imagination of first-time director Shunya Ito.

Once just an “ordinary, happy woman,” Nami Matsushima was in love with Sugimi, a narcotics officer. Their love is shown as he unrolls her from a massive sheet and, against a blue backdrop, the couple passionately does the deed (thankfully without any clumsy J-style groping). The shot is tight on Meiko’s face as she gives herself to Sugimi, and we cut to a close up of a red, bloody dot seeping through a pure white sheet. You can draw your own conclusions as to the potential meanings in that. The narrative here is told through voiceover (Kaji’s character barely utters a line of dialogue in four films), and Sugimi asks Nami to go undercover for him, “infiltrating” a Yakuza-run nightclub. As the couple tumble amongst the linen, the backdrop lights up to reveal the nightclub setting.

Before we know it, the yakuza are on to her and Nami is thrown into a weird glass room and raped  by a group of thugs—shot predominantly in close up on Meiko and from underneath. The yakuza thugs, like most males in almost the entire Sasori cycle, are portrayed as leering buffoons, and one of the group looks totally brain-damaged as her leers at her all slack-jawed. Men in these films are pathetic creatures driven by the yen in their hands and the cocks in their pants and that’s about it. A pretty interesting comment on masculinity from early-‘70s Japan, eh?

Sugimi shows up to stop the assault and, as his lover lies in the foreground, rejoices as he’s nailed the gang for not only marijuana trafficking, but also rape. Nami opens her eyes as Sugimi whoops it up. The set literally rotates behind her and we see Sugimi take a kickback from another Yakuza in his office, talk about how awesome he is and how he basically used Nami to nail the members of the other gang. Fucking with concepts of time and space completely, Sugimi then walks over to Nami, from the office set, throws some cash at her and says, “Thanks for the help.” The floor underneath Nami turns bright red as she rolls onto her back and she stares intensely into the camera. Sasori is born. One failed attempt at killing Sugimi later and she’s in jail with nothing on her mind but escape and vengeance…

NEXT: Songs of Hate (Part 2): We conclude our look at the four Sasori films of Meiko Kaji, their increasing experimental nature and examine what makes Sasori herself such a unique character in Japanese genre film.