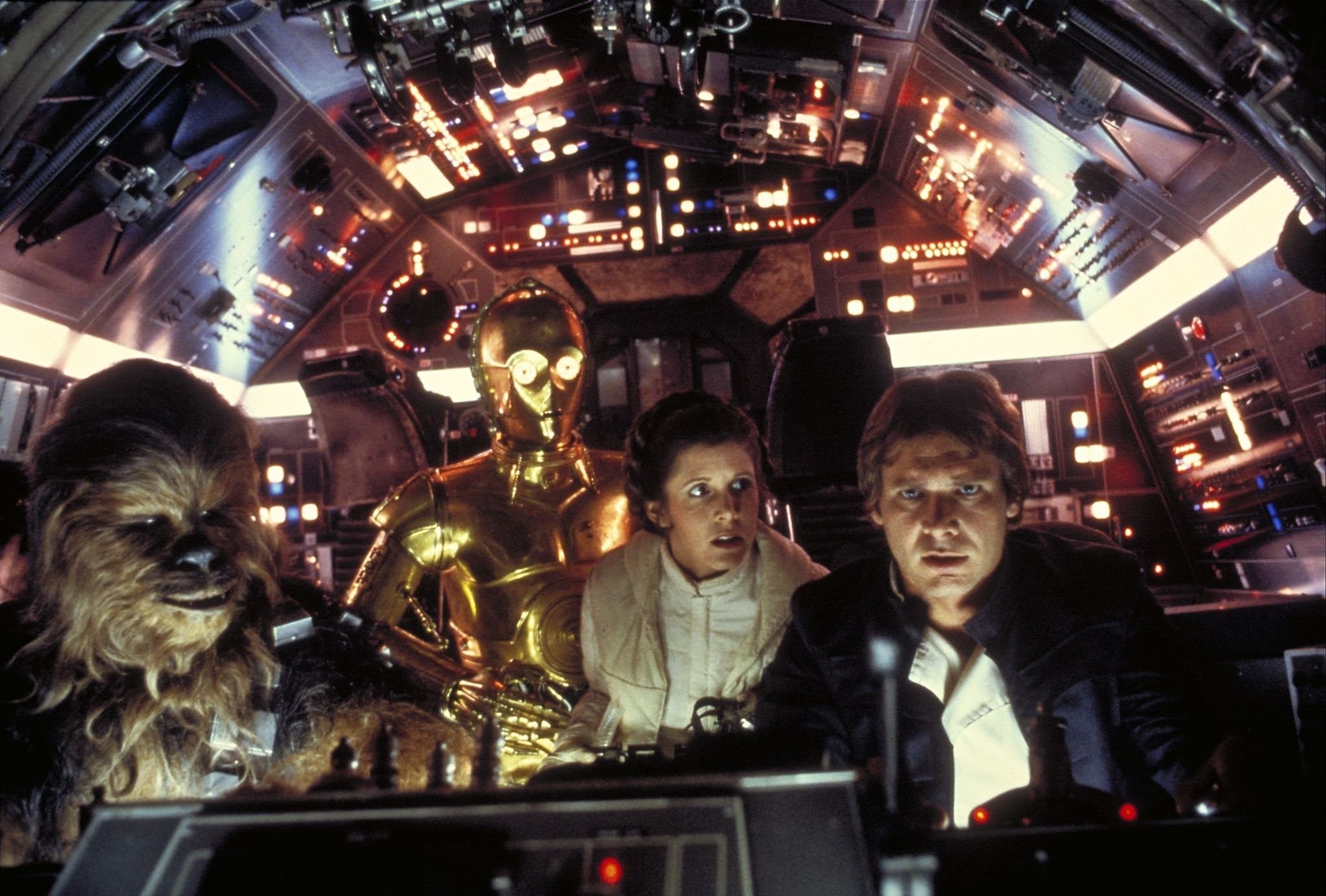 This week’s topic:  Which is the better cargo ship?  The Millennium Falcon or Serenity?

My argument is short, because I don’t feel I need to say any more than this:  It’s the Millennium Freaking Falcon.

And for my money, the coolest ship in the entire Star Wars universe is the Millennium Falcon.  Elegant in its ugliness, clunkily sleek, aesthetically utilitarian, the Falcon is the only ship from here to Corellia that I’d want to fly.

I mean, come on!  It can make point five past light speed!  That’s not even possible!  It made the Kessel run in less than twelve parsecs!  It’s so cool its speed can be measured as an expression of distance!  The Falcon is so awesome it not only shatters the laws of grammar and diction, but also physics!

Let’s talk design.  Both the Falcon and Serenity are cargo ships, and both have clever little hidey-holes for smuggling, but the Falcon‘s are in the floor!  Who’s going to check the floor?  Plus, guns!  In a universe where the Empire lurks around every corner, it’s probably more than a little comforting to have those twin over-under four-barrel cannons that are so easy to use a whiny hick farmboy from Tatooine can sit right down and blow some TIE fighters away like a pro.  And let’s not forget that kick-ass little automatic belly gun!  I’ll just bet that’s handy to have around to get you out of some tight spots.  On Serenity, you have to steal a gun from some colony, or stick Jayne and Vera out the front and hope for the best.

Also, whereas Serenity mounts a crew of five, the Falcon is so well put together, you only need two crew members.  Well, let’s say one and a half (I’m still not convinced how great a role the Wookiee plays in the operation of the ship).  And while we’re on the subject of crew, let’s talk about who’s actually running the ship.  Both Malcolm Reynolds and Han Solo are paragons of coolness, but how much does that actually count in the long run?  Who actually runs his ship better?  Mal’s got enough problems just keeping his ship’s engine maintained, but on top of that he has to deal with his strongarm who is constantly undermining his authority when he’s not actively challenging his command, his pilot and second in command who are not only in love but MARRIED (show me a captain that allows that level of fraternization between his crew and I’ll show you a captain that would be better off running a day spa or a tree farm), he’s harboring a known fugitive, and he sometimes requires the services of a prostitute (sorry, Companion) to get him places he wouldn’t be able to normally get to.  Han Solo travels light, he moves quickly, and he doesn’t bother with the complications brought up by having a crew.  The Force?  Who needs it?  Han Solo sure doesn’t, which is a good thing since the power and mystique of the Force were all but destroyed in the Midi-chlorian Fiasco of 1999.

Yes, the hyperdrive on the Falcon can be a bit dodgy, but when you’re cheerfully guffawing at the laws of physics by going FASTER THAN THE SPEED OF LIGHT, a little mechanical difficulty is little more than a piddling inconvenience.  And sure, a couple of mynocks can put the ship out of operation indefinitely.  But Serenity breaks if you look at it funny.  For God’s sake, Serenity’s primary buffer panels seem to be stuck on the ship with chewing gum.  The Falcon’s taken more shots than a fraternity house.  Heck, its sensor dish got knocked clean off in the assault on the second Death Star, and it still escaped like a champ!  In comparison to the fine crystal goblet that is Serenity, the Falcon is built like an Abrams tank.

So, Elizabeth, you keep Serenity.  I’ll be on the Falcon trying to get the Kessel run down to eleven parsecs.

Eric, I’m a big enough person to admit the Millennium Falcon has its charms. It’s all craggy and tough, and wastes no time with aesthetics because hey, there’s stuff to smuggle. It’s like the Tommy Lee Jones of the galaxy far, far away.

Yes, Serenity breaks whenever the plot dictates it must, but so does the Millennium Falcon, and at least the Serenity can be repaired by the elbow grease of its crew. One of the Firefly class selling points is its durability and ease of repair, whereas the Falcon is so fussy that only Artoo can repair it!   The Falcon is also an angry ship, sneering at droid, human and Wookiee alike, whereas the Serenity stays afloat with love. With love, man. How are you going to argue with that?

But it’s in the elements of longterm survival that Serenity beats Falcon.  She boasts a fantastic and sterile medical bay, whereas the Falcon has only that grimy medical bunk with a few dirty tubes hanging from it.    Let’s not romanticize futuristic intergalactic warfare – people get hurt, and not all of us are lucky enough to be dismembered and cauterized by a lightsaber.  I don’t want to catch tetanus because the Falcon doesn’t even have a Purell dispenser. Massive guns are great, but it’s the little things like a medical bay that keep the body count down and wins rebellions.

Plus, you can LIVE on the Serenity.  Really live.  I suppose Han has a bunk stashed somewhere (although judging from the medical bay, I shudder to think of what it’s like), but the Serenity has a comfy and cozy cabin for everyone.   It even has a darling kitchenette and living room where you can actually kick back and relax.  The Falcon has a gaming table, and judging from the way Han & Co are always clustered around it, that’s all they’ve got. War is hell and all that, but if you’ve got nowhere to decompress and sleep, you’re going to go down from space madness. And come on, how cute is that Western/Asian decor?  The Falcon is all black, steel, and sort of greasy looking. (If we consider the books canon, then the Falcon also smells bad, whereas the Serenity probably smells like leather and Chinese incense.)

Serenity is also a beautiful ship, both avian and insect, all grace and curves. She’s a real lady. Sure, she’s delicate, but that only makes her easy to underestimate, like a saloon girl or Chinese ninja nun.  Those smooth lines aren’t just good looking, they also make it impossible to hide a tracking device on.  The Falcon‘s blocky exterior makes it a scanning nightmare.

Finally, just what exactly can be smuggled in Han’s ship? Other than those floor compartments, we see no evidence of a large cargo hold.  I’m not sure it’s a ship that uses its space wisely, whereas every inch of Serenity can be accounted for, and its cargo bay is flexible enough to carry cattle in!  What can you put in those compartments beyond liquor, guns, and booze?  Sure, smugglers can live hearty on that trade, but it leaves no room for improvising.  If it’s alive or needs temperature control, I think you’re screwed.

You have fun with the Falcon, my friend.   I’m just fine on the Serenity.  There’s noodle bowls, love, dinosaur toys, armchairs and comfy beds, and a real operating bay.   If you need any of these things … oh, what am I saying, your hyperdrive will undoubtedly be too broken to visit me out in the black.