Welcome, Brothers and Sisters, to the third weekly meeting of the Church of The Hermeneutic Christ.  Blessed be the name of Sherlock and peace be upon his prophets Nero Wolfe, Jane Marple and Adrian Monk.

In my column dealing with the first episode of the BBC’s TV series Sherlock, I made the point that detective fiction is a profoundly consolatory genre.  Great literary detectives are figures who impose order upon the chaotic mire of events that make up the average life.  Through their genius accidents become mysteries and whims of fate become conspiracies.  By their ability to detect patterns and see past circumstance they impose order upon chaos.  They make the universe a more comprehensible and therefore more tolerable place to live.  This imposition of a comprehensible human narrative upon a seemingly random existence is one of the primary purposes of religion.  By creating a sacred history, the Church fathers not only imbued their teachings with a sense of historical legitimacy, they also sought to explain our sufferings and make them more bearable by placing them in a context that we could understand.  Yes we are miserable now but we are only miserable now so that we can unlock the final level of the video game that is life and so access a new zone in which we all get to place our boots on the necks of the old bosses.

However, while the imposition of a narrative upon blind chance can console, it can also alienate.  It alienates by depriving us of a sense of agency and freedom.  This is why even early Christian thinkers such as Boethius were desperate to make it clear that just because God knows the end of the story, it does not mean that we do not write it ourselves.  In order for love, salvation and sacrifice to mean anything, humanity must have free will.

Like many characters from contemporary genre TV series and films, Sherlock Holmes is a messianic figure.  He redeems.  He solves.  He heals.  He does these things by making sense of the world for us.  He does this both on a small scale by solving individual mysteries and on a larger scale by slowly revealing to us a grand conspiracy that explains pretty much all of our suffering.  This conspiracy, hinted at in “A Study in Pink” is centred upon the figure of Moriarty.

Moriarty is the Angra Mainyu to Holmes’ Ahura Mazda.  Both men are equipped with extraordinary hermeneutic gifts that allow them to impose order upon the world by deciphering its signs and portents.  However, while Holmes the ‘Consulting Detective’ seeks to reveal the truth and so punish the unjust, Moriarty the ‘Consulting Criminal’ seeks to muddy the waters and allow the unjust to achieve their aims while avoiding punishment or discovery.

The point made in “The Great Game” is that there is something profoundly inhuman about the competition between Good and Evil.  The episode revolves around a series of riddles that Moriarty puts to Holmes.  If Holmes fails to comply then not only will the wicked go unpunished but a hostage will die.  When asked why Moriarty would do such a thing, Holmes immediately points out that he cannot possibly be the only person who gets bored.  Indeed, as Holmes and Watson work their way through Moriarty’s series of riddles and challenges, it becomes abundantly clear that Holmes’ motivations are entirely his own.  He does not care about hostages.  He does not care about the guilty being punished.  He cares about winning and he cares about being distracted.

If we now map the relationship between Holmes and Moriarty back onto the relationship between such mythological figures as Christ and the Devil or Ahura Mazda and Angra Mainyu we now get a rather chilling portrait of divine agency: Yes, sacred history makes sense of our sufferings and offers up a potential solution in the shape of salvation and/or enlightenment but what kind of monstrous creature would create a world in which our suffering would be necessary in the first place?  Thank you God for allowing us a way out of Hell and Death but might it not have been a bit more humane to fashion a world in which neither Death nor Hell existed in the first place?  The inhumanity of even supposedly benign deities is one of the key themes running through the fiction of H. P. Lovecraft.  In Lovecraft’s stories, the gods are real but their motives are as incomprehensible as their absolute indifference to us as humans.

This episode of Sherlock’s Little Mistakes is devoted to the idea that people matter and that individual lives beset as they are by torment, unfairness and tragedy, are what is really important.  Not just to the people living those lives, but to the superhuman entities who pull the strings.

“The Great Game” features a series of nested problems for Holmes and Watson to solve.  The initial framing narrative involves the mysterious death of a member of the Intelligence Community named Andrew West and the disappearance of some missile defence plans.  Mycroft calls in Holmes to solve the case but Holmes is bored by it.  He cannot be bothered.

Then he gets called in to investigate a gas explosion.  A gas explosion that leads to his receiving a pink phone almost identical to the one he discovered back in “A Study in Pink”.  This phone is used by Moriarty to communicate with Holmes: He gives Holmes a photograph, a time limit and a mystery to solve.  If the mystery is not solved then the hostage who communicates with Holmes will be blown up.  The mysteries are :

* The death of a schoolboy named Carl Powers

* The disappearance and apparent murder of a man named Ian Monkford

* The strangling of a security guard named Alex Woodbridge

With varying degrees of ease, Holmes solves each of these cases liberating the hostages and learning more and more about Moriarty as he does so.  However, as Holmes displays his lack of interest both in Mycroft’s case and the fate of the individual hostages (who, needless to say, disappear once their mystery is solved), Watson comes to question his friend’s motivations and humanity.  This apparent wedge, driven between the two men, is then used to fuel a tense final confrontation in which Watson is turned into a hostage while Sherlock faces down a furiously monologuing Moriarty (played with considerable gusto by the Irish actor Andrew Scott).

The gospels of Luke and Matthew contain accounts of the Temptation of Christ.  According to the gospels, Christ is tempted to use his powers for purely selfish reasons; to feed himself, to free himself and to conquer the world and create a Kingdom of God on Earth.  This theme is quite neatly explored in a short story by the Arthur C Clarke Award-winning science fiction writer Ian R. MacLeod entitled “The Second Journey of the Magus” (the story received some excellent discussion over at Niall Harrison’s Torque Control blog).  Ultimately, rather than use his powers for himself, Christ supposedly decided to use them in a way that allowed the people of the world to achieve salvation through Faith.  Christ was tested.  He was not found wanting.

However, when Moriarty tested Sherlock and urged him to use his powers for purely selfish reasons, Sherlock swallowed not just the bait but also the line, the rod and half of the river bank.  Indeed, it is only when Holmes’ friend Watson gets taken as a hostage that Holmes realises that there may well be a human cost for playing the great game (and even then, there is a question mark over whether Holmes genuinely feels for Watson or whether he simply sees him as a useful foil — in “A Study in Pink” Sherlock says that he bounces ideas off of Watson in much the same way as he used to bounce ideas off of a skull).

So what if Holmes had resisted his Temptation?  how might the episode have played out had Holmes not been psychopathically detached from the affairs and concerns of mortal men?

After the gas explosion that caved in the windows of 221b Baker Street, Holmes sits amid the remains of his home faced by his brother Mycroft.  Concerned for his brother’s shock and desperate to take his mind off of things, Mycroft throws Holmes a bone in the shape of an apparent murder of an intelligence operative.  Mycroft could have given the job to MI5 or to special branch and it would have been solved but Sherlock is in shock and the best way of helping Sherlock get over his shock is by occupying his mind.

Sherlock reticently heads off to investigate West’s death and quickly works out that the man’s death was not so much a premeditated murder as an accident followed by a foolish attempt by a guilty man to cover his tracks and keep himself out of trouble.  Sherlock’s mobile rings.  He does not answer it.  He is busy.  His phone rings again.  He turns it off.  A few hours later he catches sight of a television, an explosion in a car park has killed and injured dozens of people.  Evidently a bomb.  Possibly a suicide bomber.  Sherlock turns his phone back on and sees that there are fifty missed calls from Inspector Lestrade.  The Yard were desperately trying to contact Holmes but he could not be found.  Evidently the explosion could have been avoided had Holmes answered his phone.

Poll-axed by grief and guilt, Holmes paces back and forth.  He is handed a pink mobile phone but he has little interest in it.  Can he call the victims’ families?  Can he apologise to them?  This is, after all, entirely his fault.  If only he hadn’t been caught up in his work then maybe he could have saved those people.

Another call comes in, this time a man has disappeared from a car.  Holmes needs to be physically forced from the offices of Scotland Yard in order to investigate.  Again, within minutes he has worked out that it is a staged disappearance but now he wants to know who is responsible for the death.  Is it Moriarty?  When the next call comes in, Holmes tries to beg and reason with the hostage.  Is there anything they can tell him?  Who did this?  Where are they?  The hostage cracks.  The hostage speaks.  The hostage explodes.  This time it is an old folks home.  Dozens lie dead.

Holmes is so distraught that he does not even hear the phone when it rings for the final time.  Moriarty does not bother to set off the last bomb.  Holmes is done.  He can solve all the crimes in the world but he cannot prevent them.  They never stop coming.  The world is full of misery and chaos and tragedy.  It never stops.  It never ends.

Pulling strings at the Ministry, Mycroft organises for Holmes to ‘retire’ to the country.  A house on the Sussex downs is set aside for him and, with Watson’s help, the world’s first and last consulting detective takes up bee-keeping.  He pays the rent by providing Organic Free Range honey to Waitrose and up-scale health food shops across the world.  Holmes cannot impose order upon the world he lives in, but he can certainly impose order upon the world of his bees. 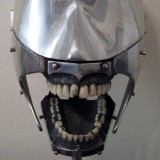