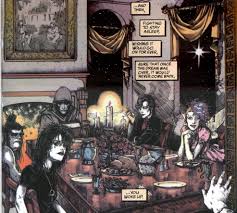 Which Occurs in the Wake of What has Gone Before

Sometimes, the English language plays along. A god-like king of dreams has died, and so there is a wake. Dreams, in the literal sense at least, die upon the dreamer’s waking, and so, too, in The Sandman when Morpheus is no more: the dreamers wake.

There is a sense of quiet throughout this chapter, a quietude. And more so: gravity. Not for lack of words; there are plenty of words throughout these pages. Instead, the quiet, grave, pensive sorrow filling each panel seeps from the pencil lines and muted hues, the scored shadows along most of the edges, and all the downcast eyes. Though the chapter is not rich with plot, it gives an inescapable sense of motion, an undercurrent — the characters are all drawn toward the last page, the last panel. It’s the greatest, grandest view of the Endless we’ve yet seen, but also in many ways the coldest, for they look like stone monuments against a slate sky. “They are the family,” a character says.

Families have a particular power at funerals. We assume a sense of loss greater than that from elected affinities. I vividly remember being at my paternal grandfather’s funeral when I was about eight years old, and standing at the receiving line afterward, with everyone coming out and paying such close attention to me, such deference. (I was the only grandchild, the last of the line.) I enjoyed and was embarrassed by the power of all the gazes, the solemn hands shaking mine, the mournful faces seeking mournfulness in my own. It felt like a performance, like I was an actor with a specific role to play.

Wakes and funerals and memorials offer plenty of opportunity for performance. Such ceremonies and performances serve various purposes, but one of those purposes can be to allow us a way to perform grief and through that performance, perhaps, to turn it into something we can live with, and live through. (Raw grief can only be lived, not performed; experienced, not acted. It is unformed, uncontrolled, and thus debilitating. Performance gives us power over it.) We show our loss and observe the sense of loss shown by others. We unite around the figure remembered. If we are The Family, we gain strength from being perceived as The Family, even if, outside the gravitational force of the memorial we drift away from each other, or dislike each other, or spread rumors about Cousin X’s gambling and Uncle Y’s failed marriages and Niece Z’s adoration of Jersey Shore.

Attendees at a wake who are not The Family can also create a sense of meaning for their grief and for their own mortality by paying respect to the dead. By paying respect, it suggests a connection: we don’t pay respect to people we don’t know, people we have no connection to, no way to judge respect beyond the basic fact of their humanity. We are drawn closer through memorializing, we see ourselves through the dead. Our attention is, for a moment (perhaps for the first time, perhaps for the millionth), given exclusively to the person who has died. Even if it is false, is that so bad? Sometimes, we participate in the Grief Olympics, vying not only for the Gold Medal in General Grieving, but also for medals in I Knew Them Better Than Anyone Else and Their Life Touched Me In Unique & Exclusive Ways. The world could probably do with fewer such games, but appreciating someone more after they’ve gone than when they were alive, while less desirable perhaps than the opposite, is still at least an appreciation.

I think now of the flawed but interesting film World’s Greatest Dad, written and directed by Bobcat Goldthwait and starring Robin Williams as a bland and ineffective father of an utterly repulsive and reprehensible young man who dies from autoerotic asphyxiation. The father disguises the death as a suicide, writes a suicide note, and the note eventually becomes a kind of cult item at the school where the boy was loathed. In death, he is seen anew. His personal effects become relics, and the father, who is a failed writer, creates a fake diary for the son that furthers the legend of this supposedly misunderstood and secretly deeply sensitive young man.

At the end of the movie, though, Williams comes clean and admits to everything. This honesty proves liberating for him, but as I sat watching the movie it seemed to me a case of honesty not being in the best interests of society at large. The lie had caused the students and teachers at the school, people who had treated the boy very badly (understandably so, given how obnoxious he was, but still: chicken or egg?), to reflect on their actions and clearly to become more empathetic, understanding, and pleasant human beings. By shattering this useful illusion, the father likely turns them all into embittered, suspicious cynics.

The wake for The Sandman is just beginning, so we don’t know yet what its repercussions will be, or if there will be Grief Olympics, or if honesty will be useful, or what sort of performances we’ll see.

The mourners have gathered, pulled along by yarns of past stories, drawn together from dreams.

In Which a Wake is Held

Three years have passed. Not in The Sandman, but here between these meditations. Within only a few installments of finishing the central series, I couldn’t go on. I read chapter two of The Wake and could think of nothing to say. Characters from all the books were coming back, congregating, ready to pay respects. I wasn’t ready.

What has changed? Everything. Nothing. Years have passed. Can I think of something to say now? Perhaps. Is it worth saying? I don’t know. (But then, I never know.)

The second chapter of The Wake is transitional. It assembles the cast and crew. (It’s good that I’m returning with it and not with a more eventful chapter, because I should probably say some words before we resume, and a more ostentatiously complicated narrative would tempt me to tangle with its knots.)

For all their many flaws, the first set of Sandman Meditations preserve a continuous reading. Picking up now after three years away will create a different kind of text, because I am a somewhat different person, as we all are somewhat different people three years down the line. I thought about re-reading all the previous issues of the comic so that The Wake would resonate more fully, but I decided not to, because then I would want to go back and rewrite all the old Meditations, to fix the misapprehensions, misprisions, and mistakes. Were this a series of essays about a different comic, I would reread and recalibrate. But this is Sandman, and a certain haze of memory isn’t a terrible thing here. It lends the stories and images a new vastness, a new depth that results from the effort to remember how all the dots connect. Now, with the early issues especially quite hazy in my mind, I must dream my way back through it all.

Everybody’s here the narration tells us on the first page of this chapter.

But no, they aren’t. Three years have passed between these readings, and we have all lost people in that time, all had to think of death, if not Death. I felt a special melancholy on reading Chapter Two because a friend with whom I’d had many conversations about comics and The Sandman and these meditations died only a few weeks ago. David Beronä was a scholar and a fan, author of the volume Wordless Books and numerous articles on early 20th century graphic narratives. He was the head librarian at the university where I was working part-time when I started this series, and unlike me he’d grown up with comics and read them all his life. He was friends with other scholars and creators, and he encouraged new and young talent by lecturing at the Center for Cartoon Studies in Vermont. For all his scholarly tendencies, he never lost his child-like wonder with the way images and stories could work together. We had planned to have lunch together eighteen months ago, to catch up after both being too busy to chat much, and I got a quick note suddenly that we’d have to put it off, he wasn’t feeling well. A few days later, he couldn’t speak or write. Doctors diagnosed a brain tumor. Treatment brought some of his speech and writing back, but never to where it was before. He couldn’t return to work. He and his wife moved away to be closer to family. David said it was okay, there was a good comics shop nearby. He returned to an old love: painting. He walked through woods. He spent time with people he loved. Friends, including some folks whose names are legendary, sent him books and comics. But the tumor was aggressive. And now David is gone.

Everybody’s here. No, not quite.

We hold wakes, funerals, and memorials to pay tribute. It’s like the end of Death of a Salesman, a play I must admit I don’t much like, but the ending always gets me: Attention must be paid.

Have we paid attention? Have we seen each other, heard each other? Can we stand at a memorial and testify to what we witnessed, these lives other than our own, lives sometimes gone in seconds, lives so often over before it seems just?

Lives bring other lives together, and a moment like a wake demonstrates that. Strangers unite through the knowledge of the dead. Chapter Two shows that vividly, and shows again how lives and stories are similar: they both have plots and subplots, character arcs that intersect with other character arcs, moments of epiphany, of echo, of escape. Worlds collide, and we are each worlds amidst worlds.

In some ways, perhaps, that is what remembrance allows: many, many more than one heart. One life, even a life so far beyond mortality as to be Endless, is a node in a network of hearts. We are each the heart of our own dreaming, and by living we welcome other hearts to see our dreams, and by remembering the dead we keep their hearts alive alongside ours.

A friend of mine’s mother, now deceased, used to say, “I don’t mind being forgotten, but it’s nice to be remembered.”

It is, indeed. And nice, too, to remember.