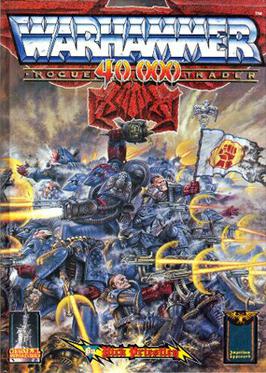 The Appeal of Getting Your Ass Kicked

Back when I was a kid, in that era of willing vulnerability when we’re all sponging up ideas and inspiration to form our adult tastes, I saw something in the sci-fi genre that really stood out. In hindsight, I’m sort of proud of myself for noticing it, but maybe I’m giving my youthful self a little too much credit.

What I saw was this:

Futuristic soldiers in power armour and firing massive guns wasn’t exactly revolutionary twenty years ago when I was 10 – and these days, it makes up approximately 492% of video game sci-fi storylines. I’m not advocating that image as something outstandingly original. (I’d also be doing the setting of Warhammer 40,000 a massive injustice if I didn’t admit that the art, like the setting itself, has come a long way since then.)

What gripped me at the time though, was the fact that these guys who were obviously the human heroes of the whole deal… Well, look at them.

This has “last stand” written all over it, and that’s what clicked in my head. These guys, whoever the hell they were, were getting their asses kicked by the shadowy shapes emerging from trenches in the background. The surviving soldiers are bunched together, surrounded by the bodies of their brothers, while inhuman silhouettes stalk towards them over a scene of literal scorched earth.

In England, the concept of war is very closely associated with World War II. Our grandparents fought in it; our media makes a big thing about it; we learn all about it in school (at least, insofar as all this applies to guys and girls in their 20s, 30s and 40s.) This picture evoked that feeling in me right then and there, which was clearly the artist’s intention – despite the sci-fi elements, this is blatantly reminiscent of the brutal battlefield photos from WWII. One of the guys is even clutching a flag, trying to keep it raised as he’s cut down.

This was sci-fi that instantly felt grim, bitter, and strangely English, of all things, which made it feel curiously familiar. In turn, the familiarity made it feel more credible, more plausible, and subsequently much more immersive.

What kind of crazily dark sci-fi was this? Why was it mixing the destructive imagery and themes of World War II with more traditional sci-fi?

In short, it resonated inside my spongy infant brain, and I wanted to know more.

Obviously, that’s a retroactive explanation with a vocabulary chock full of delicious hindsight, but even though I never phrased it in those exact terms back then, that was how I started to really get interested in the setting of Warhammer 40,000.

II
The Panicked Case for the Defence

This is going to come across as a little defensive at first. Just bear with me, and you’ll see why.

I’m a pretty cynical guy, sometimes. I don’t mean to be, but when one of your interests is a niche within a niche, you tend to come face to face with about six million insulting stereotypes. Some of them carry some weight, while some of them have pretty much no basis in reality.

If you’ve got a double-niche interest, you know the feeling all too well. Maybe you collect tractor magazines, or something. Perhaps you race those little radio-controlled cars, or whatever. Hell, maybe you even dress up in shoe polish and pretend to be a dark elf at Live Action Roleplay. I mean, someone has to. I’m not here to judge. I empathise with you.

Well, I empathise a bit. I also think you’re a nerd, but we can still be friends.

Let’s not beat around the bush, fiction based within an established license (Star Wars, Star Trek, Warhammer 40,000 or whatever else) often suffers some pretty extreme criticism, and a lot of it is valid – that’s Sturgeon’s Law, after all.

But when the license itself is based on “a board game”, you’re in for a brutal ride when the bell rings and it’s time to justify what you enjoy. Games are usually seen as inherently childish, thus lacking any value as something nuanced and detailed enough to nourish the adult brain.

And, damn, painting little figures of Space Marines is about as far from traditionally cool as you can get, unless you’re also saying stuff like “Actually, I’m a blue dragon”, or admitting you know what a hundred-sided die looks like.

I guess those are way worse.

(Spoiler: a D100 looks like a golf ball, making it a charlatan among proper dicekind.)

So with that in mind, I’m going to wax lyrical on what Warhammer 40,000 actually is. Not the game. Forget the game. I mean the setting as a sci-fi universe with decades of development, and the novels set within it.

III
We call it “Grimdark”

There’s that World War I and II vibe again…

I’m aware that as articles go, the first one usually has to stick to a degree of setup, and it can read as a little dry. I apologise for that, and I’ll keep it to a minimum. But excuse me while I blabber just a bit, because I do freaking love this world.

Warhammer 40,000 takes its core concept and rolls with it right to the end of the universe: In the grim darkness of the far future, there is only war.

That’s the mood behind the theme, and it’s what creates the palpable undercurrent of gritty, dirty desolation.

I use three words to describe Warhammer 40,000 at its simplest, when we’re talking terms of theme and atmosphere. Bleak, Gothic, and Baroque.

Bleak: “Without hope or encouragement.”

Gothic: “Noting or pertaining to a style of literature characterised by a gloomy setting, grotesque, mysterious, or violent events, and an atmosphere of degeneration and decay.”

Baroque: “Extravagantly ornate, florid, and convoluted in character or style”.

See, Warhammer 40,000 is a sci-fi setting where everything that could possibly go wrong, has gone wrong. All of the optimism in science fiction; all of the hopes and tales of a brighter future with the ascension and evolution of mankind… All of that has failed. The golden age has passed, and humanity failed to cling onto the precious lore of those magnificent centuries.

Our species has an empire that spans the galaxy, but everything – everything – is devoted to fuelling the engines of our eternal crusade against alien races and the ever-present threat of heresy. The galaxy is besieged, and humanity’s empire crumbles at the edges. We lose ground, we lose worlds and star systems, every night.

The God-Emperor of Mankind was a secular visionary devoted to bringing about humanity’s perfection, but for the last 10,000 years he has existed as nothing more than a stasis-caught corpse shackled to a life support machine, using his psychic powers to scream his last breath into the endless void, in order to power our species’ space travel. Humanity worships a husk bound to a throne – and worse, to keep the Emperor’s corpse and its vestiges of power preserved, thousands of souls are sacrificed each month, their lives fed into the soul engines powering the Emperor’s life support.

We are capable of warp flight, but it’s far from a matter of speed and convenience. To make a warp jump is to punch a hole into another reality, and race through a literal Hell realm of boiling psychic storms. Daemons formed from raw human emotion claw at the ship, kept at bay by ancient shield generators.

Invention is heresy. Literally, heresy, because only the schematics preserved from our golden age can be trusted. All mechanical genius is the purview of the Martian Mechanicus, who believe machines have souls, and construct massive Titan war machines to walk the battlefields as gods, and Imperial Navy battleships the size of cities.

Humanity feeds its sons and daughters into the meatgrinder regiments of the Imperial Guard, in the keenest allegory to both World Wars (the Guard’s tanks even resemble WWI vehicles), while our greatest warriors are taken as children and genetically modified in hidden monasteries who stand eight feet tall in layered ceramite power armour; can spit acid; and their personal firearm is a fully-automatic rocket-propelled grenade launcher.

These last are the hallmark heroes of Warhammer 40,000: the Adeptus Astartes. Those are the guys that come up the moment you Google “Space” and “Marine” in the same sentence. At best, they are monastic, hypnotically-trained religiously revered warriors so genetically enhanced that they barely count as human anymore. At worst, they’re psychopathic degenerates with chainsaw swords that are barely tolerated by their own species, but are too powerful – and too necessary – to be abandoned.

And these are the good guys.

Kids like it, sure. It’s got war in it, and it’s a developed, cool setting. The ties to the game bring in a lot of younger readers, though it’d be a lie to say I – and, I assume, my colleagues – are writing for that age group. The setting itself is just so absolutely, punishingly dark, that it hardly rewards immature storytelling. That’d be doing an injustice to it.

To paraphrase myself, what draws me to Warhammer 40,000 is how bleak existence is. How corruption taints absolutely everything, from a peasant’s harsh life; to a hive city worker toiling 17 hours a day in a meaningless grind; to the billions destined to die in humanity’s armies; to supernatural threats most humans would never see.

Yet people still live, fight, survive… and that’s where the stories are. Degeneration is inevitable, even in the aspects that are intentionally funny. I think that’s powerful. It’s a kickass theme. Omnipresent decay is an insidious concept that makes my skin crawl, and 40K has it in spades. It’s what Gormenghast would look like if Titus Groan had an empire. It’s got the stagnation versus freedom aspect that ran through Peake’s work, and it’s got the taint of madness, misery and emotional sensitivity.

And on that note, with the dreadfully vital introductions done, I’ll leave you to digest it in peace. Feel free to hit me up with any questions, comments, or demands for any aspects of the Warhammer 40,000 setting you’d like me to rage about in the future.

In a stunning break from tradition, I’m trying not to swear every three seconds.

Can I keep that up?