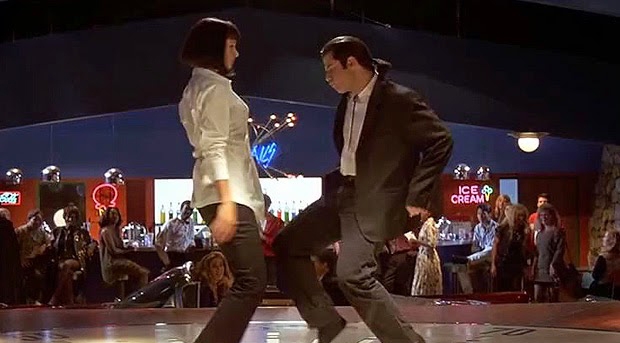 Crime films often make me hungry. Often the restaurant scenes are among the best remembered in crime flicks. The coffee shops and Italian kitchens and juke joints where criminal characters go to grab a bite or do dirt serve to define them.

In some cases, it’s because crime films are a sit-down with a distinct culture, and there’s little better distinction for culture than food. It says more than a monologue. These places are home to some criminals, an escape for others, doom for a few. They’re some of the best moments of bad stories.

And these are the best among them.

Appeared in: The Big Easy (pictured above)

Tip’s is the perfect Crescent City hot-spot if you’re looking for a nightlife scene that spices top-talent home-cooked music with a high-crime-rate neighborhood. Dennis Quaid took Barkin here for her inaugural how-do to N’Awlins’ seamy side, and anybody who’s seen a DQ movie from the 80s knows that motherfucker knows how to have a good time (see also, Jaws 3-D – he spends half the film nigh-on-shirtless). Tipitina’s was founded by fans of Professor Longhair, a demigod of New Orleans music, and continues to rep Big Easy music in all its forms, from Cajun zydeco to rap from the Calliope.

While not as swanky or authentic as Tipitina’s, the J&J Sandwich shop scores more points on sheer volume of nasty deeds. It was the site of the “Nite Owl Massacre” – one of several massacres in the award-winning adaptation of James Ellroy’s noir epic, L.A. Confidential. The Nite Owl has the dubious distinction of being the 24-7 hash house where the story is sparked off with a brutal multiple shooting that, true to form in noir, leads our not-so-intrepid heroes to the police corruption it was intended to cover up. The actual site, the J&J Sandwich shop, has the distinction of being owned by a “super nice” Korean couple. Try the grilled chicken.

Jack Rabbit Slim’s is the place to be if you’re as fanatic about nostalgia as former video store clerk, Quentin Tarantino – a retro ’50s diner where everything from the wait staff to the dance floor is a reference to the hey day of Americana. In Pulp Fiction, Uma and her outstanding gams get a workout on center stage courtesy of Vincent Vega (John Travolta), brother of the late, great Toothpick Vic Vega, Mr. Blonde of Reservoir Dogs. Sadly, Jack Rabbit Slim’s is but a state of mind, styled after the deceased Ed Debevic’s. No five-dollar milkshakes for you.

The classic tragedy that goes down courtesy of McBeth’s isn’t as blood-soaked as at the Nite Owl, but it scores extra points for being the pipe dream that drives the whole homicidal plot of neo-Shakespearean cult classic, Scotland, PA. Macbeth’s classic plot of lust for glory leading to betrayal and murder is cast in the form of fast food workers offing their kindly manager, Mr. Duncan, so that they can realize their vision of a drive-thru, McBeth’s. Taking one glance at the soft-focus postcard above shows just how desperate some people can get. One man’s dollar-menu is another murderer’s treasure.

Appeared in: A Clockwork Orange

Crime Scene: Getting ready for a bit of the old ultra-violence

The Korova Milk Bar is the only place to go when one’s looking to make up one’s rassoodock what to do with the evening. A Clockwork Orange scorches the Korova’s image into the audience to open Stanley Kubrick’s stunning rendition of Anthony Burgess’ dystopian crime novel. The futuristic uber-socialist England it inhabits is a more civilized time, with the Korova offering milk laced with Oxycontin (vellocet) or adrenal gland extract (drencrom). Nothing quite like getting ripped to the tits on mescaline and rolling drunks, like Alex and his droogs. And “ripped to the tits” is literal at the cinematic Korova – Kubrick uses lactation and infantilism imagery to pound home his central message of what children the advancement of the Nanny State has made people. If the ladies of the Korova dispensed Bud Lite instead, he wouldn’t have been far from the mark.

In the hyper-materialistic cosmos of American Psycho, failing to attain status is the only crime, and Dorsia is the Mount Olympus of hip Manhattan restaurants. It serves the film version of Bret Easton Ellis’ unparalleled examination of the sociopathic mind as the object of envy that aggravates psycho protagonist, Patrick Bateman, to kill his rival. As if Patrick really needed an excuse, but still, Dorsia is said to be the best – and therefore only – place To Be Seen In. It is the psychopath Shangri La. Alas, Dorsia is merely a state of mind, with prolific reviews on the internet from American Psycho fans lauding the imaginary eatery. The scads of other prestigious ’80s-era restaurants in Ellis’ book are all real – and not to be missed, if you want your pathetic life to mean anything.

Appeared in: The Godfather as “Louis’ Italian American Restaurant”

Style points alone grant “Louis’ Italian American Restaurant in the Bronx” its standing on our list: The Godfather staples many scenes into the viewer’s brain – any scene with Luca Brasi is my favorite – but Michael Corleone’s execution of Sollozzo and McClusky at Louis’ takes the cake for many. Planting a gun in the bathroom of an Italian restaurant so that you can use it to surprise-murder your arch-enemies has occurred to everybody who’s eaten Italian, but only Al Pacino pulled it off with elan. Louis will live forever in the American public consciousness – thanks in large part to the high ranking of The Godfather on any and all “Top Films of All Time” lists – but the actual place it was shot, The Luna Restaurant on White Plains in the Bronx, has passed from this world.

The beating heart of many a gangster’s night on the town, the Copacabana has featured in crime lore – fictional and otherwise – since Frank Costello opened it in 1940. It has hosted a fistful of Scorsese villains, a couple Marx brothers and countless mistresses. Barry Manilow even wrote a musical about it. If that’s not criminal, I don’t know what is. The most famous reported crime at the Copa came in the form of a squad of Yankees including Mickey Mantle holding a birthday party for Billy Martin that wound up with them beating up racists heckling Sammy Davis Jr. This place is pure New York. It has moved around the Island quite a bit since then, and now resides in Times Square.

In the canon of crime film restaurant scenes, Pat & Lorraine’s is a Gutenberg Bible. It didn’t just ingrain itself in the collective consciousness. It opened Reservoir Dogs with its dialogue, and so spawned Quentin Tarantino’s career. This is the place where Tarantino himself, as Mr. Brown, explains the mysteries of Madonna’s ’80s phase and where Mr. Pink (Steve Buscemi) argues against tipping. From its seedy setting to its sleazy banter, the Pat & Lorraine’s scene became an oft-imitated icon of a generation of crime film. The breakfast there is just as cheap and dependable.

Every crime film and their weak sister has done a shoot at Johnie’s. It tops our list on prestige alone, hosting formative films from some of the biggest talents of the genre. The Googie-style joint got so prestigious that it shut down to the public and now only opens for the cameras. Considering Johnie’s appeal is its cinematic combo of slimy diner atmosphere and crumbling super-modernism, it’s probably not much of a loss to the LA food scene. Its contributions to crime film will never close their doors.

Feel we missed any? Make your claim in the Comments below.