Before we get too far into this, I want everybody to remember that there was a time when the members of Mötley Crüe were presumed to be dangerous servants of the Devil.

I should also say that I’m relatively new to the notion of Illuminati Satanism, and that anything you read herein has been out there in some form or another for ten or more years.  If you’re pressed for time, I can save you the trouble of reading on and just tell you right now that I think the whole notion of selling one’s soul to the Devil for a few years of fame is a load of horseshit.

In music, the first notable embodiment of soul merchant was Paganini, the gambling, womanizing, show-off violin virtuoso who dazzled Europe in the late eighteenth and early ninteenth century.  If you’re not inclined toward classical music, suffice to say his caprices will melt your face.  Paganini was famously quoted to have said, “I am not handsome, but when women hear me play, they come crawling to my feet.”

Which is delightful, but the real question is, did he ever wake up screaming “Fuck the world!”?

Of course, the most famously tendered soul in the whole history of music is that of Robert Johnson, the gambling, womanizing, show-off blues guitar virtuoso who dazzled crowds at American juke joints in the 1930s, right up until the moment he was served up a bottle of poisonous, murdering whiskey.  If you can fight through the hiss and cracks and pops of a Robert Johnson record, you will find some of the purest personal torture ever set to music, as well as some damn fine guitar-pickin’.

So how do we make the jump from virtuosity on an instrument to virtuosity on the mike dubbed over sound generated primarily by electronic means?  How does it happen that the genre of music most commonly condemned with the phrase “That ain’t even music,” suddenly becomes the most prominent example of the devil’s work in the contemporary music scene?  And when did Satanism get so goddamned complicated?

The New Satanism is largely a product of packaging.  In Paganini’s day, the only evidence that was available to prove that Paganini was a servant of Satan was his ability, and written and spoken accounts thereof.  There were, as any old fuck will gladly tell you, no music videos or multi-million dollar publicity campaigns.  There were posters, which usually only consisted of a hand-rendered drawing of the artist nancing about, violin on shoulder, before a small crowd of kerchief-pinching dandies.  The most famous image of Robert Johnson was one that he took of himself in a nickel photo booth, guitar-in-hand.

The primary symbols of the Illuminati, as interpreted by the sages of the blogosphere (who, incidentally, will man dull pickaxes in any version of Hell that actually does exist), are the pyramid and the all-seeing eye, which you will find on the back of your bottom dollar above the oft-misinterpreted “Novus Ordo Seclorum,” which means “New Order of the Ages,” and not “New World Order.”

The legion of volunteer Illuminati Satanist hunters will quickly point to any occurence of a triangle or pyramid, along with any image that places emphasis on a single eye by way of lighting, camera angle, or hairstyle, as dollars-to-donuts evidence of Illuminati servitude.  There are a billion examples of this in hip-hop (a fact that has a lot to do with the sheer amount of jewelry in hip-hop), and rather than spend the night digging around for photos, I will simply tell you that if you see an artist whose bangs cover one eye, or whose hand forms a triangle around one eye, according to latest data, that artist is a Satanist.

Note that there was none of this talk when hip-hop was about Adidas and fighting for your right to party.  It was only when hip-hop moved into the realm of talking about the reality of street life and violence and fear and paranoia and personal angst, and when production became more layered and diverse and complicated.

The most prominent and successful figures in popular today, namely Jay-Z, Kanye West, Common, Rihanna, and Lady Gaga, are all alleged to be of this ilk, and the symbolism described above will be cited as examples.  Rihanna in particular has gotten wise and taken to calling herself the “Illuminati Princess.”  Like Paganini and Mötley Crüe and Slayer before them, none of them are doing anything to dispel the rumors.

The blues myth, if you haven’t already heard it a million times, was that you traveled out to a crossroads in the middle of the night with your guitar, eventually the devil showed up, took it from you, retuned it, then handed it back to you.  Instant virtuoso.  No subscriptions to Guitar Player, no repeated listening to Steve Vai albums, nothing.  Easy transaction.

Nowadays, you’re not only a slave to Satan, but also apparently a secret society of a bunch of old white guys.  And either you sell your soul and fill your art with Satanic symbolism, or the Illuminati will take your work from you and insert it all on their own.

Fine and good.  And whatever you say.

Here’s the truth.  Number one, you’re a slave to a secret society of old white guys whether you sell your soul or not.  It’s just the way the thing is built.

The other truth is this.  People are generally uncomfortable with talent.  Rich, well-educated people in particular.  Talent is not a quantifiable asset, and is thus somewhat mysterious to people who haven’t discovered it within themselves.  Rich people are particularly uncomfortable with talent when talent becomes translatable into loads and loads of money, because people who are making money off of sheer talent are likely having fun.  And there is nothing that raises the ire of hard-working, well-educated rich people than other, poorer, less-educated people having a good time and getting paid a shitload of money to do it.

How could Paganini, the third child of a failed trader, have been such a virtuoso?  It couldn’t have been a combination of obssesive, marathon practice sessions and unspeakable levels of talent.  Right?  How could Robert Johnson, a poor black country boy, ever have amassed such a repertoire of incredible guitar techniques?  He certainly didn’t PAY for them, now did he?  What, from practice and dedication to craft?

And how are these guys getting laid so much?

There’s no great mystery.  An artist, one that is worth a shit, translates a subjective experience into an objective reality.  Whether that subjective experience is about breaking up with your girlfriend or getting pulled over with a half million dollars worth of blow in trunk, it doesn’t take the Devil or the organization he sponsors to get that message across.  It takes talent.  It takes practice.  It takes sleepless nights.  It takes falling on your face a few times.

And if somebody’s agenda is to paint you as an Illuminati Satanist for making a living at it, have the sense to use it to your advantage. 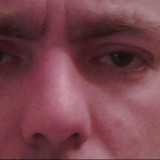 +Josh Converse work has appeared in Crime Factory, Plots with Guns, Black Heart Magazine, Out Of the Gutter, and A Twist of Noir. He is the only person to have ever simultaneously held the WBO and WBC middleweight and welterweight titles without any witnesses. Josh can talk his way out of any situation, particularly when on the cusp of runaway success. In 2010, he was the recipient of Nick Tosches’ final apology. He lives and works and eats cereal in Chicago.

About damn time you understood your situation Converse. Face it. I’m an old white guy and I pwn you. Besides you’re in bigger trouble right now because you didn’t mention the Space nazis In The Center Of The Earth and they are hugely pissed at you because you gave Paganini top billing over them. In my position of old white guy god I’m doing my best to keep them off you but, brother, you gotta quit pissin’ them off. Those fuckers got missles fer cryiin’ out loud. Other than that is was a very cogent essay. Thankee Thankee Ver’ Mush.

That’s a load off my mind.

The religion of Satanism has nothing to do with any of this junk. There is one legal Church of Satan, founded in 1966 There is one The Satanic Bible (1969) and a variety of canonical works published by the Church to futher the singular religion. Satanism is an atheistic religion that uses Satan as a metaphor to embrace the ideal of self-divinity and self-responsibility instead of kneeling and begging. This illuminati cap is just plain silly.

Satan loses. I read the end of the book. Suckers.

Dude, spoiler alert. (P.S. Do you have any other fiction recommendations?)

they are sick,why should they think that the whole word would one day be theirs when the almighty(God) is the owner of the world

They never believe That God exist, or maybe they have chose their way to follow