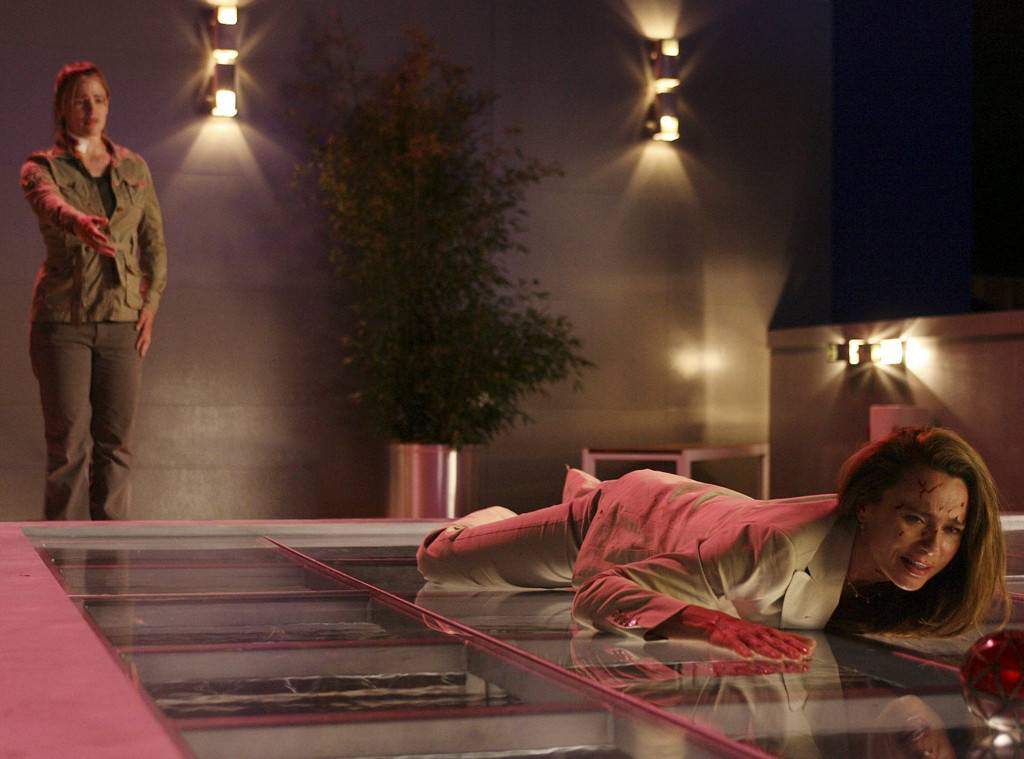 You’d think it would be easy to wrap up a crime TV series. Punish the bad guys, save the day and solve the mystery. The audience can turn off the set with their belief in an ordered universe confirmed. Easy as it may seem, plenty of crime shows flip out and faceplant when it’s time for their finale.

Some try to get too clever or artistic. Some fling the story outside the genre in a geeky attempt to surprise their viewers. Most just don’t know what the Hell they’re doing.

Here are history’s worst offenders: 5 crime TV show finales that could have ended with a bang, but instead just blew.

We’ll get the obvious out of the way: The Sopranos series finale.

Only the critic community has invented what eludes science still—a way to polish a turd—and yet, most hardly tried when it came to The Sopranos finale. That’s because most had embraced the series so dearly that it stung their hearts when a random, “fade-to-black” conclusion spat in their faces.

I’d given up on The Sopranos years earlier, pining for the high-point of the Buscemi-directed “Pine Barrens” episode. I grew tired of episodes puttering along while I waited for the Red Mafia to cap Tony. But some folks kept the faith, maintaining a loveless marriage, only to have The Sopranos dump them during a narrative mid-life crisis.

To be fair, The Sopranos was just trying to declare itself the Seinfeld of crime drama: Making a big, nihilistic statement about how there are no endings in life and ultimately they’re a show about nothing and blah, blah, blah. But nihilism is, at its philosophical essence, just a “fuck you” to attachment. So even when you trick it up, this finale is just a middle finger to one of the most devoted viewerships in crime TV history.

Like so many TV dramas that begin with crime and wend their way to the supernatural—I’m looking at you, Millennium—The Event lost its bearings. Unlike Millennium, it only took The Event a single season to go from tense to nonsense. What began as an intriguing global-level thriller skidded its way into a finale that was only more disappointing than it was baffling.

It was the style of the times. Lost had established a remorseless tradition of fucking with the audience. Hollywood writers thought increasing quantities of loony bullshit could substitute for pay-off. The Event was the worst perpetrator of this dark era: A slick, well-cast shell of a show surrounding a cloud of PCP smoke for a central narrative.

The finale confirmed what most viewers had begun to suspect and flee from by mid-season. The writers had no clue what they were leading to, except more enigmas wrapped in conundrums. The President of the United States reclaimed his office by proving his usurper used a sci-fi virus to threaten humanity, major characters are revealed as aliens, and other major characters just flat-out vanish from the storyline. And I don’t mean Quantum Leap-style, jumping-to-another-universe vanishing. I mean they just don’t show up.

Neither did the audience, and before The Event could get even more full of hyper-dramatic non-events, it was taken out like Old Yeller.

Unlike The Event, Alias coasted into its final season with a strong cult following that truly cared what happened to its characters. Unfortunately for them, the writers didn’t.

In the Alias finale, characters who inspired hordes of devoted cosplayers were discarded like paper dolls. Jack, the popular pater familias of the show’s hero, Sydney, gets iced for one. Maybe the writers wanted to declare that no one, even the most beloved, was safe. In response, their inboxes were shown to be unsafe when it came to floods of hate mail.

The bad calls don’t end there. Alias had taken a decidedly mystical turn in its latter seasons—again, I blame the popularity of the model for all mindfuck TV dramas, Lost—and the finale didn’t pass up a chance to let their paranormal freak flags fly. The Big Bad of the show, Sloane, was not only made immortal, but got snubbed by a ghost. Objects of omnipotent mystical power were at play. And, worst of all, it was all capped off by a wink-and-a-nod about a possible superbaby being born.

The whole acid trip is bookended by flashbacks and flash-forwards, which are the hallmark of some noxiously lazy writing. They’re writing’s Napoleon complex—shouting louder to make up for how stunted they are. And in this case, that’s a darn shame—Alias had strong chops when it came to drama. The finale gave that up by panicking, flailing, and knocking down storylines and characters like a toddler in a China shop.

If the name of the series wasn’t a clue as to how very, very few shits this show’s creators gave, Criminal Minds: Suspect Behavior had a finale that basically just fucked off.

On the surface of it—once you got past the groan-worthy play on words in its title—Criminal Minds: Suspect Behavior seemed to mean so well. It had a cast of A-grade struggling film actors in the form of Forest Whitaker and Janeane Garofalo and the backing of some deep pockets at CBS. Unfortunately, it also had no clue what the fuck it was doing. Every episode was overacted, under-written and as stylized as an iPhone-filtered profile photo.

The finale was the cymbal crash of all these bad habits: It was just as dreary and senseless as prior plots. It resorted to bush league story tricks like undercover work being compromised. It brought no value to the overall plot arc, even as an ending. Worst of all, it was a cliffhanger, even though everyone knew the show was being cancelled.

Tin dialogue delivery, spastic editing, sepia cinematography and absolute zilch in the narrative department—when it came to elements of bad TV, Criminal Minds: Suspect Behavior’s finale was a Dagwood sandwich. They gave so little care to it, they couldn’t even be arsed to write in an ending.

Seriously, Life on Mars, screw you for this finale. In fact, for the entire series—a splendid British TV show that was misappropriated to the States, mismanaged by its producers and ultimately given that absolute worst kind of finale.

You know the kind I’m talking about. If you don’t, and you’re impatient, scroll down. And if you’re still around and wondering what Life on Mars was, here you go:

In the UK, Life on Mars is the story of a man from 2005 who suddenly finds himself in 1973, working as a cop. It is a subtly strange, gloriously stylized nostalgic romp through the era of David Bowie and Dirty Harry. It worked. And then, as with so many shows, it was seized by Hollywood and hauled across the Atlantic to be watered down, cranked up and shoved at the American public.

Not surprisingly, this didn’t pan out—what is clever and referential in Britain usually becomes heavy-handed and sappy in the US. Life on Mars was no exception. Dying of terminal stupidity, the show had to bow out in its first season.

The decent thing to do would have been to just wrap it up like the UK series. They had been ripping off mangled versions of it anyway. Instead, the folks at Life on Mars opted to underscore the fact that they were more adept at fucking up critically acclaimed material than at copying it, and went with that most beloved of finale conventions:

They revealed it was all a dream. And not even a Newhart or Dallas kind of dream, where the hero wakes up in a normal life. No, they went whole-hog, super-silly St. Elsewhere style, and declared that the show was all a colossal hologram. Designed to amuse an astronaut. In 2008.

Yeah, because that shit happened all the time in the last year of the Bush administration.

I have literally no idea who the Life on Mars (U.S.) finale was intended to satisfy, except maybe for the cackling devils sitting on the shoulders of the staff writers.