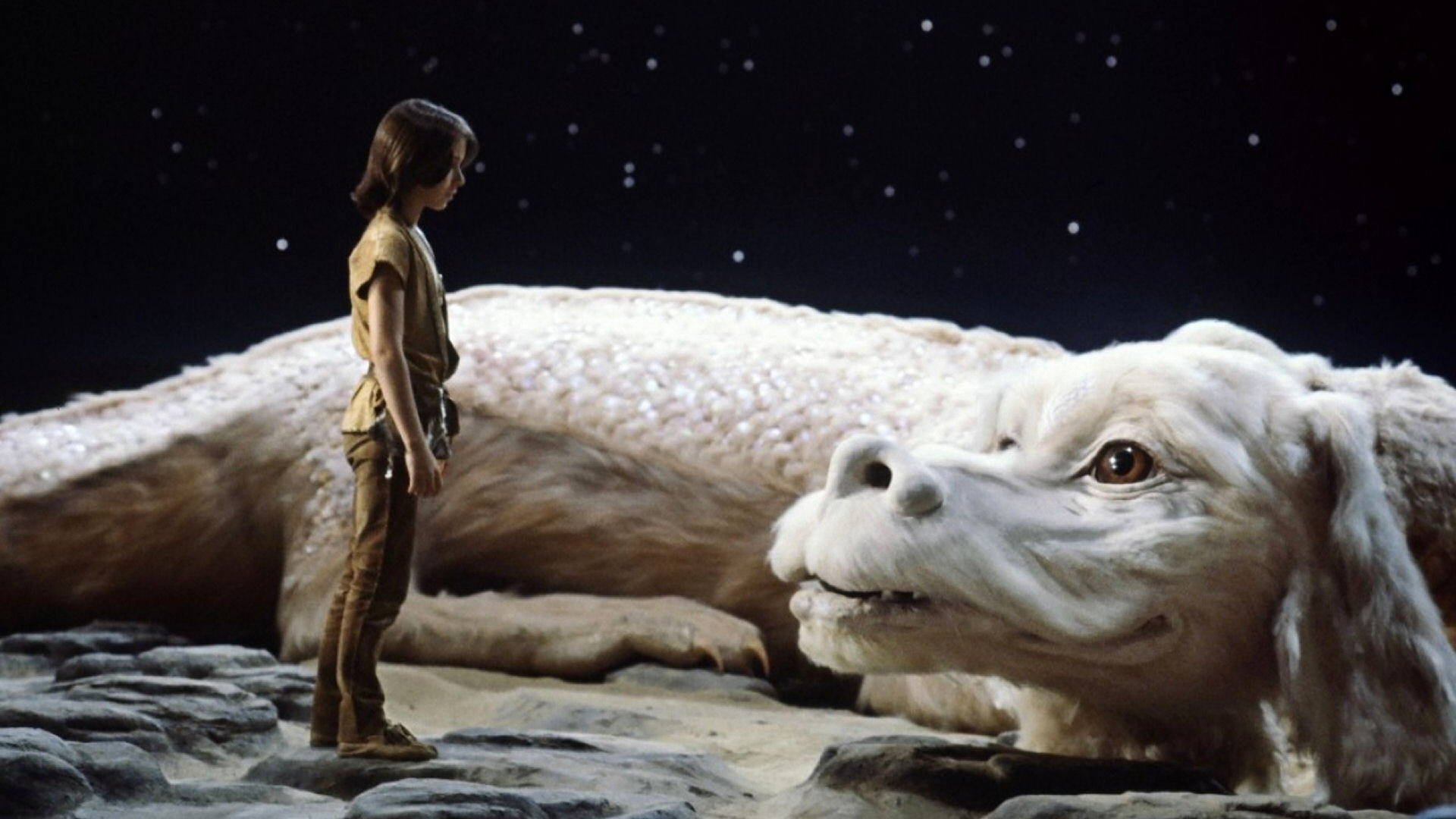 The question on everyone’s lips, which we humbly seek to answer today, “Which is the better ridiculous mode of transportation, Shai-Hulud from Frank Herbert’s Dune series, or Falkor the Luck Dragon from The Neverending Story?

Simple, stupid!  Plant a thumper in the sand, and let its rhythmic thumping sound call forth Arrakis’s great sand leviathan, the Sandworm, plant your kiswa maker hook in one of the enormous beast’s ring sections, and hold on tight while it rolls over to protect itself from the irritating sand!  Then, you attach your steering ropes, and with a mighty Haiii-yoh! your journey across the Arrakeen desert is as good as over!  Sit back and watch the desert roll by in ease and comfort.

What, that sounds too complicated?  Too far-fetched?  Too much risk for so little reward?  Kull wahad!  Maybe you’d be happier with some frou-frou Luck Dragon!  You know, the sparkly animatronic deus ex machina with the face of a Yorkshire Terrier, the body of an Angora cat, and the voice of the kindly grandpa character from any of the Saturday Morning cartoons of your childhood?  Oh, yes, by all means, plant me on the back of one of those!  Make me forget all about my horse getting swallowed up in the swamp, and the Gmork chasing me, and the Nothing eating up Fantasia.  Please, sign me up for a ride on a luck dragon!

No thanks, buddy. If I’m gonna ride across the desert, I’m gonna do it on the back of Shai-Hulud.  I’m gonna have my stillsuit on, I’m gonna have my noseplugs in, I’m gonna have a stilltent and water carrier on my back, and anyone who doesn’t like it can get the hell out of my way!  I’ll be singing a rousing rendition of “Galacian Girls,” and drinking spice coffee and keeping a wary eye out for Harkonnen patrols.

Can you imagine what it might be like to harness one of those beasts?  The raw power of standing atop a four hundred meter long behemoth, watching the harsh environs of Arrakis move by you while the planet’s dual moons rise and fall before you.  The term “pretty freaking cool” springs to mind.

Yes, all these things derive from the great and mighty Sandworm of Arrakis.  A luck dragon?  Please.  It’s a pale shadow of the awesome power of Shai-Hulud.

I’m as big a fan of terrifying behemoths as the next girl, and if you said “Want to ride on my Sandworm?”  I’d…well, frankly, I’d slap you before realizing oh yeah, we’re on Arrakis and you’re genuinely offering to do the dirty work of wrangling Shai-Hulud.

No, when it comes to fantastical modes of transportation, safety is key. That’s why I like Falkor.   He’s not going to eat me. Ever. He’s just pure kindness.  Give him a scratch on the ear, and he is your friend forever.   And he’s so much easier to call!   You don’t need a thumper or maker hooks to use in a process so damn difficult even Herbert couldn’t quite describe it.  It just…happens.   Just time the swing right there, Freman.  Yeah, ok.  Sorry, I’ll take a “Hey, Falkor! Can we go to Whole Foods, and then Disneyland?” any day!

I suspect this amazing serendipity works for just about anything you might ask of him, and not just be restricted to travel locations.  “Falkor! I’d like Bradley Cooper to accompany me on a trip to France!”   “What luck! We just happened to fly over his house, and he has his bags packed!”    “Awesome! Thanks a lot, Falkor!”

He’s also tireless, and doesn’t need food or water. Even Shai-Halud gets sleepy after awhile, and you all have to hop off and find a new worm to ride.    It’s not like a bus. You could be waiting out there in the desert awhile, and if your thumper isn’t working, I’d hate to be you. Whereas Falkor can keep flying and flying, always amiable, just existing on magic and dreams or whatever.

And he is cute and companionable.  When you’re on a trip, it can’t hurt to have an intelligent animal friend.  It’s like having a radio, a good CD, and your best friend all in one. Besides, since when is charm a crime? I mean, really, if we’re going on pure aesthetics, why favor the creature that looks like a lamprey on stereoids?    If I may speak, woman to man, if you fly into town on the chocolate-eyed Falkor, ladies from miles around will be flocking to you. “Awww? Can I pet him?”  “Is he friendly?”  “He’s so cute! You must be really sweet to be his friend.”

As awe-inspiring as Shai-Halud is, I’ll take my sparkly dog-dragon.  Perhaps I’m a coward, but I prefer my fantasy transportation to be powered by wishes and dreams. Plus, I won’t have to consume my re-processed waste if I’m thirsty because Falkor, we’re going to Starbucks!